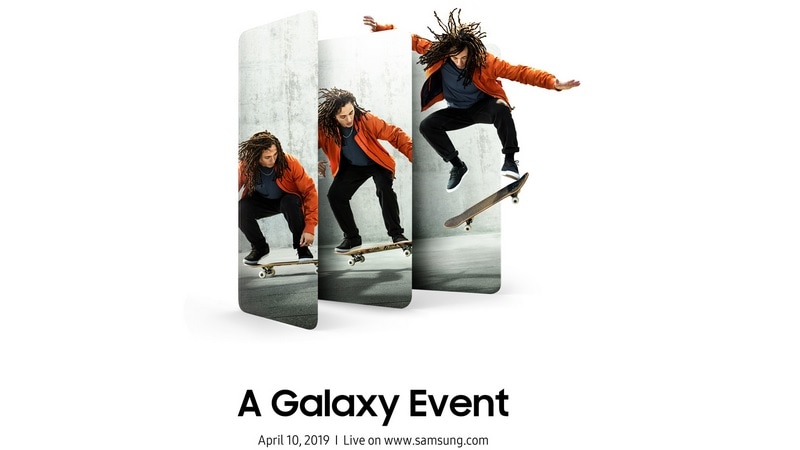 Samsung is gearing up to add new smartphones to its revamped Galaxy A Series in 2019. The South Korean tech giant has started sending out invites for an event on April 10, where it plans to announce the new phones. The event will be live-streamed and the company will be hosting press events in Bangkok, Milan, and Sao Paulo. Samsung has not specified the name(s) of the smartphones that will be unveiled next month, but Samsung has made it clear that more than one Galaxy A-series smartphone will be introduced. And with what we've seen in leaks and official listings, we expect the Galaxy A90 to finally make its debut, possibly alongside the Galaxy A60, Galaxy A40, and the Galaxy A70 smartphones. Thus far in 2019, Samsung has already launched the Galaxy A10, Galaxy A30, and Galaxy A50.

Samsung's official invite states that the company will “unveil its latest Galaxy A devices” at the event on April 10, which makes it almost certain that more than one Galaxy A-series smartphone is in the pipeline. As for the smartphones that are expected to be unveiled, the Galaxy A90 and the Galaxy A40 are the prime candidates as both of them have been spotted on Samsung's official website recently. However, the presence of three different tiles on the launch invite indicates that Samsung might launch three Galaxy A-series smartphones next month.

The Galaxy A90 was recently listed on the official Samsung US website alongside some Asphalt 9 content that will be available to the buyers. It is rumoured to sport a sliding and rotating camera. However, concept renders and another leak indicate that the Galaxy A90 might feature a pop-up selfie camera and sport the New Infinity Display without a notch or hole-punch. It is tipped to feature an optical in-display fingerprint sensor and a 6.41-inch display. The Galaxy A90 will reportedly be powered by the Snapdragon 710 SoC, while One UI based on Android Pie will handle things on the software side.

Samsung Galaxy A50, Galaxy A30, Galaxy A10 With Android 9 Pie Launched in India

As for the Galaxy A40, the support page for the upcoming smartphone went live on the company's German website as well as the Samsung UK website earlier this month. Moreover, the Galaxy A40 has already received its FCC certification, which means an official launch is on the horizon. The Galaxy A40 is rumoured to feature an in-display fingerprint sensor as well as a ToF 3D sensor, and will reportedly be powered by the in-house Exynos 7885 SoC, paired with 4GB of RAM.

The Galaxy A60, which has reportedly received its Bluetooth certification, is another smartphone that might be launched at Samsung's event next month. The Galaxy A60 is tipped to come with a 6.7-inch full-HD+ Infinity-U Display and will reportedly be powered by the Snapdragon 6150 SoC, paired with up to 8GB of RAM and 128GB of internal storage. The Galaxy A70 and the Galaxy A20e are the two other smartphones that have appeared in leaks recently and might be introduced at Samsung's event next month.