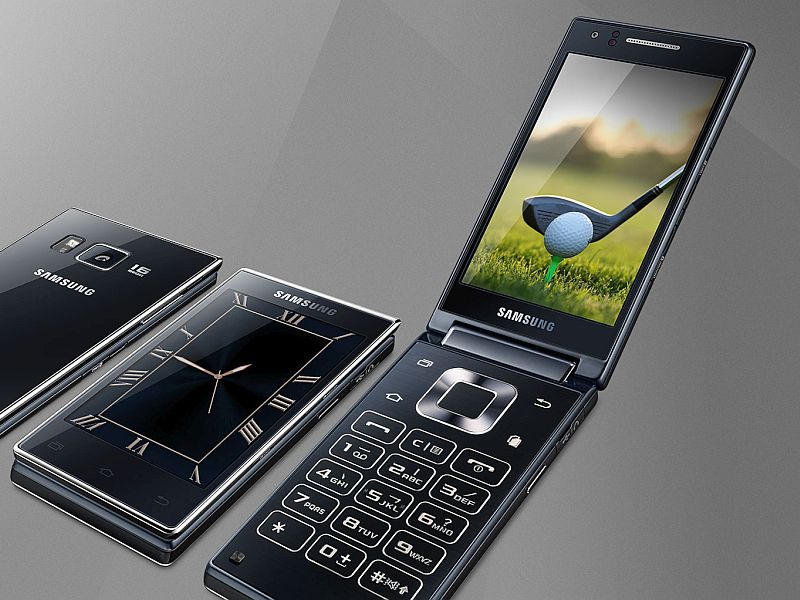 Samsung, expanding its flip phone portfolio, has launched the G9198 flip phone in China. The latest Android-based dual-screen flip phone is now listed on Samsung's China site. Unfortunately, there is no word on the pricing and availability details of the Samsung G9198.

The Samsung G9198 features two 3.9-inch Super Amoled touchscreens, on the inside and the outside of the top half of the handset, both featuring a WXGA (768x1280 pixels) resolution. The Samsung SM-G9198 runs on Android; however, the official listing does not specify the exact version. It offers dual-SIM support and comes with 4G LTE, 3G, and 2G connectivity options. The Samsung China listing reveals that the handset supports China Mobile or China Unicom 4G networks.

A hexa-core Qualcomm Snapdragon 808 processor powers the Samsung SM-G9198, clocked at 1.8GHz with 2GB of RAM. The new flip phone sports a 16-megapixel rear camera with LED flash, while there is a 5-megapixel front-facing camera also on board. The camera sensors on the Samsung G9198 can be expected to pack the same sensors as Samsung Galaxy S6, Galaxy S6 Edge, and Galaxy Note 5.

There is 16GB of inbuilt storage on the Samsung SM-G9198 flip phone while it supports expandable storage up to 128GB (via microSD card). The Samsung SM-G9198 supports Bluetooth, Wi-Fi, GPS, GLONASS, and Micro-USB connectivity options. It is backed by a 2020mAh battery with no word on the talk time and standby time delivered. The new flip phone from Samsung measures 120.3x61.2x16.3mm and weighs 204 grams. It features a T9 keyboard alongside featuring dual touchscreens.

Considering that Samsung has listed China Mobile or China Unicom as official mobile carriers for the handset, it is unlikely that the flip phone might be announced outside China.

Flip or clamshell phones are steadily gaining limelight with LG and Samsung launching phones targeting global consumers that are still attracted to the folder or clamshell design of phones.

Last month, Samsung launched the Galaxy Folder flip phone in South Korea priced at KRW 297,000 (approximately Rs. 16,350). The smartphone was announced to go on sale this month in Korea.

LG also launched its new flip phone, the Wine Smart, earlier this month and announced that it would be released later this month in select markets including France, Italy, Poland, Spain, Kazakhstan, and Japan followed by other regions.