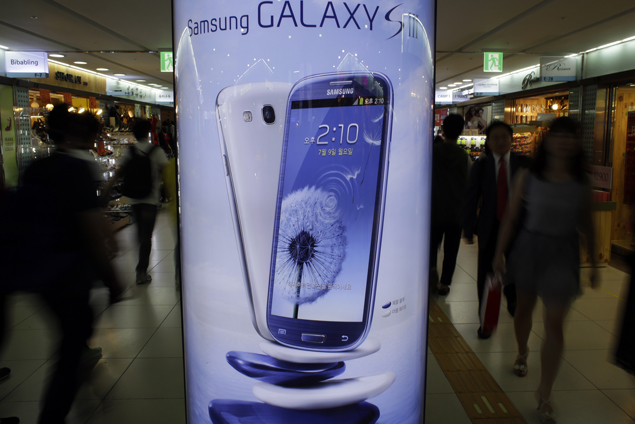 Samsung Electronics pulled further ahead of rival Apple in the global smartphone market in the third quarter, showing strong demand for its latest top-of-the-range model, the Galaxy SIII, according to a Reuters poll.

The two industry giants were the only companies among the top 10 cellphone makers to have won market share last quarter, due to the strength of their smartphone brands Galaxy and iPhone the poll of 40 equity and telecoms market analysts showed.

"The quarter will probably become a milestone for those phone makers striving to survive," IDC analyst Francisco Jeronimo said.

"It will expose the weakness of their performances compared to the mammoths of this industry, Apple and Samsung, which are expected to publish stellar results following the launch of the iPhone 5 and the success of the Galaxy SIII."

Samsung was expected to have sold 55 million smartphones in the quarter, compared with Apple's sales of 26.6 million iPhones, benefiting from its broad range of smartphones.

Apple's late-September launch of its iPhone 5 dented sales of the older version. A ramp-up in production and sales of the new model will likely help narrow the gap with Samsung i n the fourth quarter, analysts said.

Among the 10 largest cellphone makers, sales at HTC, LG Electronics and Research In Motion are expected to fall more than 30 percent from a year ago, despite overall market growth.

Gartner analyst Carolina Milanesi said many of these large cellphone makers were struggling to stand out as they are squeezed by Apple and Samsung at the high-end of the market and by Chinese phone companies at the lower end.

"They are suffering because they do not have a differentiated offering and a strong enough brand," she said.

The poll showed ZTE and Huawei were both expected to be among five largest cellphone vendors next year, illustrating the growing clout of Chinese companies.

In the cellphone market as a whole, including basic cellphones, Samsung is expected to continue to extend its lead over Nokia after it ended Nokia's 14-year reign as the world's largest in the first quarter. Samsung is estimated to have sold 100 million phones in the third quarter.

Nokia, now global No 2, was expected to report a sharp fall in phone sales from a year ago as its new Windows Phones are yet to compensate for falling sales of legacy products.