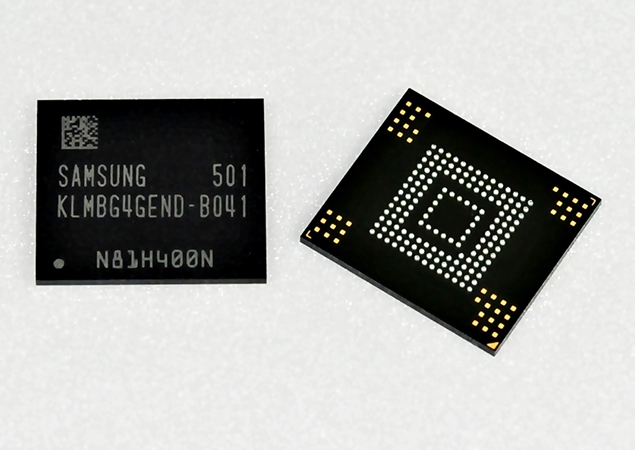 Just few weeks ahead of Samsung Galaxy S6's launch at the MWC 2014 in March, Samsung has announced it has made a breakthrough single-package solution for memory chips that will use up to 40 percent less space in smartphones.

Dubbed ePoP (embedded package on package) and claimed to be an industry first, the memory chip packaging fuses 3GB of RAM with 32GB of storage together along with a controller. The remaining space inside the smartphones with the ePoP chips can be used for extra battery or any other function depending on what the company plans. The 3GB of LPDDR3 mobile DRAM gives a I/O transfer rate of 1866Mbps and comes with a 64-bit bandwidth.

Samsung further mentioned that these ePoP chips are already being mass produced by the firm. The ePoP chip takes 225 square millimetres of space, same as a conventional mobile CPU and is 1.4mm thin so it can be stacked on top of the CPU inside smartphones. Samsung said that other OEMs can also make use of these chips inside their handsets.

It is worth mentioning that Samsung has been offering a similar single-package solution for wearable devices dubbed 'wearable memory'.

"By offering our new high-density ePoP memory for flagship smartphones, Samsung expects to provide its customers with significant design benefits, while enabling faster and longer operation of multi-tasking features," said Jeeho Baek, Senior Vice President of Memory Marketing at Samsung Electronics during the announcement. "We plan to expand our line-up of ePoP memory with packages involving enhancements in performance and density over the next few years, to further add to the growth of premium mobile market."