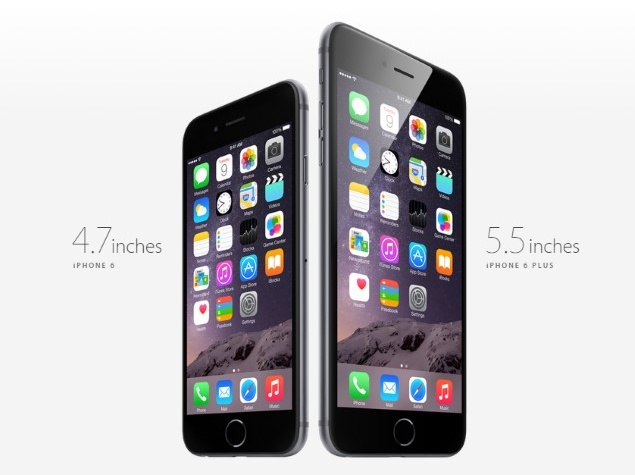 Soon after Apple's Tuesday launch that saw the unveiling of next-generation iPhone 6 and iPhone 6 Plus, two arch rivals of the Cupertino giant - HTC and Samsung - without wasting much time fired a shot each at the company's new release.

Of course Apple's rivals could not let the company's entry into the big-screen smartphone (or phablet) segment go unchallenged. After all, the company famously stuck to its guns by using 4-inch displays on 2 generations of smartphones (iPhone 5, iPhone 5s and iPhone 5c), whilst manufacturers all around it were offering a wide-variety of sizes and slowly progressing to the larger displays on their flagships.

First it was Samsung Mobile's Philippines Twitter handle that put out this tweet saying, "Big improvements and innovation come with change - even they thought so." The tweet was accompanied by an image that quoted the late Steve Jobs, "No one is ever going to buy a big phone," with a tagline below that noted, "Guess who surprised themselves and changed their minds."

Notably, the quote used by Samsung is said to be from an event back in 2010 that saw Jobs (then CEO) addressing wireless 'death grip' issues iPhone 4 consumers had (via Phone Arena). Jobs had then famously also called the relatively large HTC HD2 and Droid X 'Hummers', referring to the large tank-like jeeps.

Samsung's salvo was soon followed by HTC, which greeted the new iPhone release by saying, "Bigger screen. Better performance. Elegant design. Welcome to the party." The tweet was accompanied by a hashtag iPhone 6.

Nokia, not being far behind, also published a video mocking Apple's voice-based virtual assistant, Siri. Notably, the video does not mention anything about the new iPhone 6 or the iPhone 6 Plus. It's also worth mentioning that Microsoft, while announcing the Lumia 830, had compared its price against the iPhone 5s.

Not forgetting the Apple Watch that was also unveiled alongside the iPhone 6 and iPhone 6 Plus. The famous food chain, Chili's Grill & Bar took a gentle swing at the Apple's first smartwatch and said, "Giving you more options in wristwear... Introducing the iGuac, the future of wearable fresh."

Giving you more options in wristwear... Introducing the iGuac, the future of wearable fresh. pic.twitter.com/3knZSGvu2t

It's now become a tradition that the iPhone launch every year seems incomplete until we see some handset manufacturers trying to capitalise on the event's announcements by taking few digs at Apple soon after the launch.

Last year, Nokia was on top with this tweet.

To remind you, Apple announced the iPhone 6 and iPhone 6 Plus alongside the Apple Watch wearable on Tuesday. The Cupertino-based giant also revealed its new mobile payment mechanism called Apple Pay.