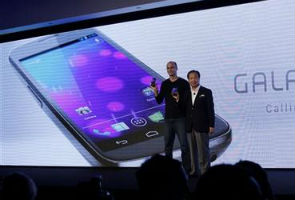 The new phone is seen as the Samsung-Google partnership's answer to Apple's iPhone 4S, which in less than a week on the market has already sold more than 4 million units.

At a glitzy unveiling in Hong Kong, Google executive Andy Rubin said Android's latest "Ice Cream Sandwich" operating system demonstrates innovation "that works on phones and tablets and everything in between."

Android Beam allows transfer of data between two smartphones by holding them together, while Face Unlock uses facial recognition technology to activate smartphones, rather than conventional passwords.

However, during a demonstration at the Hong Kong unveiling, the Face Unlock feature failed to activate the Galaxy Nexus.

Executives of South Korea's Samsung said the Galaxy Nexus will go on sale in November in the U.S., Europe and Asia, including China and Japan. They did not reveal the new smartphone's price or its sales volume targets.

Samsung and Taiwan's HTC Corp. are the biggest users of the Android platform, which is engaged in a furious competition with Apple's own operating system for market share in the rapidly expanding smartphone sector.

The U.S. International Trade Commission issued an initial ruling Tuesday that Apple's iPhone does not violate four patents owned by HTC, a blow to the Taiwanese company.

On Monday, Samsung asked Japanese and Australian courts to block sales of Apple's new iPhone 4S in those countries over alleged patent violations. The actions are part of an intensifying patent battle between the smartphone giants.