Samsung Galaxy A52 appears to come bundled with an AC charger and a case. 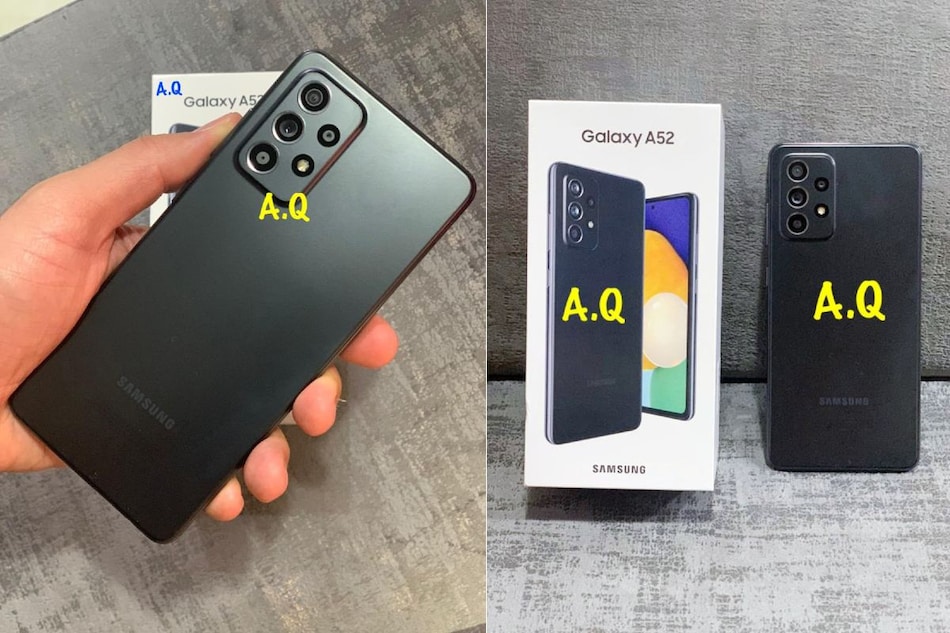 Samsung Galaxy A52 live images seem to have been leaked on Twitter. The leaked images show the design of the Samsung phone, along with its retail box and key specifications. The Galaxy A52 is expected to come with an IP67-certified dust- and water-resistant design. Separately, the Samsung Galaxy A72 has been tipped to come with stereo speakers. The phone also appears to have Dolby Atmos 3D surround-sound experience. Some specifications of the Galaxy A72 have also been suggested through this latest development. Both Samsung Galaxy A52 and Galaxy A72 are rumoured to launch in India in March. Support pages of the phones also appeared last week.

Tipster Ahmed Qwaider shared a number of images on Twitter to suggest the design of the Samsung Galaxy A52. Some of the images allegedly show the phone from the front and back. The purported retail box of the Galaxy A52 has also been leaked through a couple of images shared on the microblogging network.

As per the images, the back of the Samsung Galaxy A52 has a matte finish. There is also a camera bump that houses quad sensors, along with an LED flash.

The Samsung Galaxy A52 also appears to have a hole-punch display design that was recently suggested through leaked renders. One of the images also suggests the Galaxy A52 specifications and hints at a 64-megapixel primary camera along with optical image stabilisation (OIS) as well as IP67 certification for dust- and water-resistant design. A recently leaked image also suggested the same dust and water resistance. Furthermore, the fresh images suggest bundling of an AC charger and a case with the Galaxy A52.

In addition to the leaks regarding the Galaxy A52, another tipster has shared the purported specifications about the Samsung Galaxy A72 through the Twitter account TechTalkTV. The details appear to have been sourced from an official listing of the unannounced Samsung phone.

The leaked images suggest stereo speakers along with Dolby Atmos audio on the Samsung Galaxy A72. The phone also appears to have 30x Space Zoom.

In terms of specifications, the leaked images suggest that the Samsung Galaxy A72 would come with a 6.7-inch full-HD+ Super AMOLED Infinity-O Display with 90Hz refresh rate. The phone is powered by Qualcomm Snapdragon 720G SoC, along with 6GB and 8GB RAM options and 128GB as well as 256GB onboard storage, the images indicate. The Galaxy A72 could also offer microSD card support for expansion up to 1TB.

The Samsung Galaxy A72 also appears to have a quad rear camera setup, with a 64-megapixel primary sensor, 12-megapixel ultra-wide-angle shooter, 5-megapixel macro shooter, and an 8-megapixel sensor with a telephoto lens. Further, there would be a 5,000mAh battery with 22.5W fast charging.

Samsung is also offering a 32-megapixel selfie camera sensor on the Galaxy A72, the leaked images suggest. On the dimensions front, the Samsung phone measures 165x77.4x8.4mm and weighs 203 grams.

Gadgets 360 wasn't able to independently verify the shared details, so for now, consider the leaked information with a pinch of salt.