Samsung Galaxy A50, Galaxy A30, Galaxy A10 With Android 9 Pie Launched in India: Price, Specifications 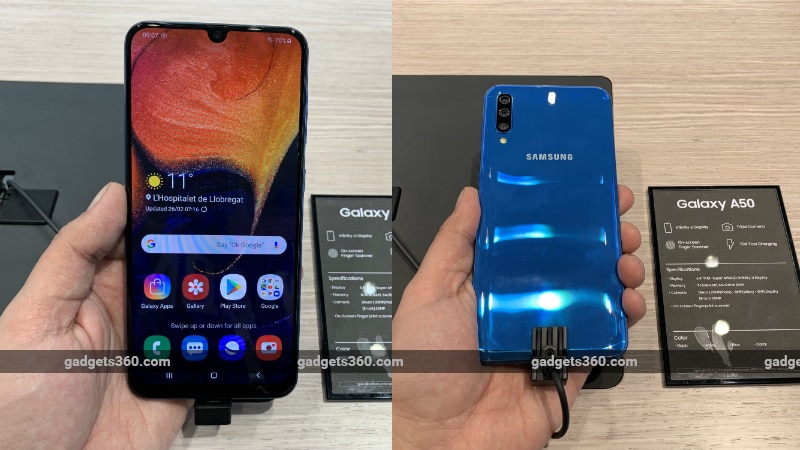 Samsung Galaxy A50, Galaxy A30, and Galaxy A10 have formally been launched in India. The new Galaxy A-series models feature Super AMOLED display panels along with multiple camera sensors and include as much as 4,000mAh battery. There are is also Android Pie out-of-the-box along with Samsung's One UI on top. Samsung notably unveiled the Galaxy A50 (seen above) and Galaxy A30 for the global markets earlier this week and showcased them at Mobile World Congress (MWC) 2019 in Barcelona. Alongside the two superior Galaxy A models, the South Korean company has launched the Galaxy A10 that comes as a budget option in the new family. The new Galaxy smartphones are a part of the company's increased push in the mid-range and entry-level segments in the country to take on the likes of Xiaomi, Vivo, and Oppo.

Samsung Galaxy A50, Galaxy A30, Galaxy A10 price in India

Samsung will start selling the Galaxy A50 and Galaxy A30 in India from March 2, while the Galaxy A10 will go on sale in India starting March 20.

To recall, Samsung unveiled the Galaxy A50 and Galaxy A30 for the global markets earlier this week, while it confirmed the existence of the Galaxy A10 through a tweet just a couple of days ago.

Samsung Galaxy A50, Galaxy A30, Galaxy A10 specifications

The Samsung Galaxy A50, Galaxy A30, and Galaxy A10 all the three models run Android Pie along with One UI on top. Samsung has also provided preloaded shooting modes such as Ultra-Wide, Slow-Mo, and Hyperlapse.

In the new Samsung Galaxy A family, the Galaxy A50 features a 6.4-inch full-HD+ (1080x2340 pixels) Infinity-U Display backed by a Super AMOLED panel and 91.6 percent screen-to-body ratio. Further, the Galaxy A50 is powered by an octa-core Exynos 9610 SoC, coupled with 6GB and 4GB RAM options.

The Galaxy A50 has 64GB of onboard storage option that is expandable via microSD card (up to 512GB). There is also an in-display fingerprint sensor. The smartphone packs a 4,000mAh battery that supports 15W fast charging via USB Type-C port.

Just like the Galaxy A50, the Samsung Galaxy A30 also has a 6.4-inch full-HD+ (1080x2340 pixels) Super AMOLED Infinity-U Display. The smartphone is powered by an octa-core Exynos 7904 SoC, paired with lone 4GB RAM option.

Samsung has provided 32GB of inbuilt storage on the Galaxy A10 that is expandable via microSD card (up to 512GB). Besides, the Galaxy A10 packs a 3,400mAh battery.