Samsung Galaxy A13 4G is said to have a glossy polycarbonate rear panel design. 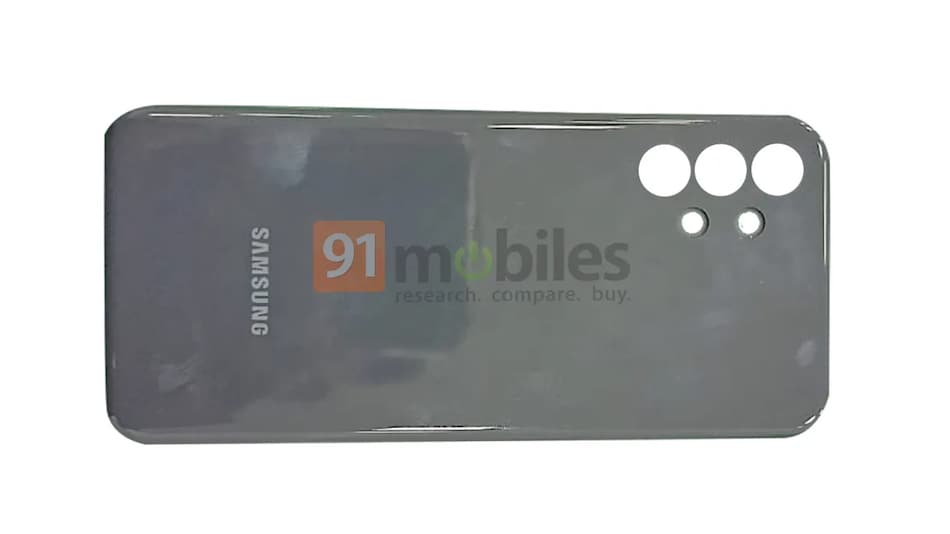 Samsung Galaxy A13 4G launch seems to be around the corner as new live images of the handset have leaked online. The images suggest that the new Samsung phone will include a quad camera unit at the rear. The Samsung Galaxy A13 4G also appears to have a polycarbonate back panel with a speaker grille, a 3.5mm audio jack, and a USB Type-C port arranged at the bottom. Although Samsung has not shared details about the phone's launch in India, the Galaxy A13 4G mass production is said to have recently started at the company's Greater Noida facility.

In a report, 91Mobiles shared live images sourced from the 'production line' that show the design of the upcoming Samsung Galaxy A13 4G. The leaked images show the rear panel of the upcoming Samsung phone in a Grey colour option similar to the Galaxy S20 series, with ‘A13 LTE' branding on the back panel. The rear panel of Galaxy A13 4G is seen sporting quad rear cameras, an LED flash, and a Samsung logo. A speaker grille, a 3.5mm audio jack, and a USB Type-C port also appear to be arranged at the bottom side. The volume rocker and the power button can be seen on the right edge. The images also hint at a glossy polycarbonate design for the back of the Samsung Galaxy A13 4G phone.

Samsung Galaxy A13 is tipped to come in both 4G and 5G variants. It is also speculated to be the company's cheapest 5G phone. The 5G variant has also leaked on multiple occasions in the past. The phone is expected to come in Black, Blue, Orange, and White colours. The handset is said to pack a MediaTek Dimensity 700 SoC. It is also tipped to sport a 6.48-inch full-HD+ LCD display and feature three RAM and storage configurations — 4GB + 64GB, 6GB + 128GB, and 8GB + 128GB.

The renders of the Samsung Galaxy A13 leaked earlier suggested a waterdrop-style notch display at the front housing an 8-megapixel selfie shooter. Other previously tipped specifications suggested a triple rear camera unit — instead of a quad camera tipped by new images —with a 50-megapixel main sensor.