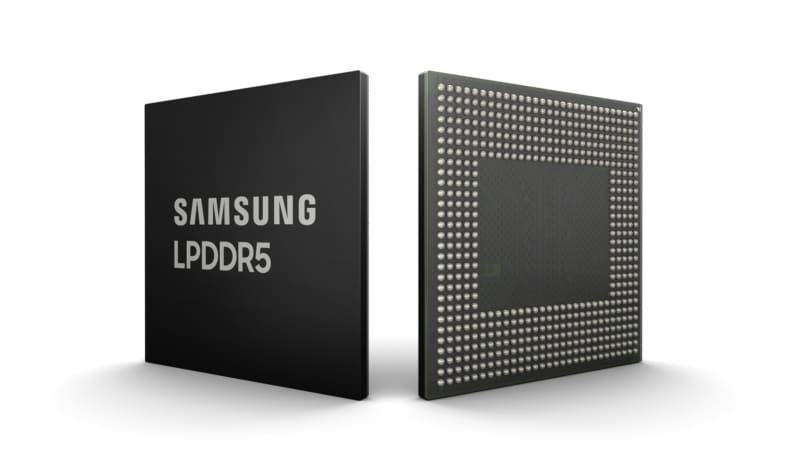 In a new development, Samsung has officially announced the arrival of the 8Gb LPDDR5 DRAM for mobiles. This is the first 10nm class 8Gb LPDDR5 chip, successor to the 8Gb LPDDR4 chip that was launched back in 2014. This new 10nm class 8Gb LPDDR5 DRAM will be useful to support the upcoming 5G networks, and AI-powered mobile applications as well. This chip offers a data rate of 6400 megabits per second (Mbps) which is touted to be 1.5 times as fast as the other DRAM chips used in current flagships of today.

The new 8Gb LPDDR5 DRAM is the latest addition to the company's premium DRAM lineup, which includes 10nm-class 16Gb GDDR6 DRAM and 16Gb DDR5 DRAM. The 6400Mbps data transfer rate allows the new LPDDR5 to send 51.2GB of data, or approximately 14 full-HD video files (3.7GB each) in just a second. Samsung has made the 10nm-class LPDDR5 DRAM available in two bandwidths - 6400Mbps at a 1.1 operating voltage, and 5500Mbps at 1.05 operating voltage.

The new LPDDR5 DRAM offering also promises to deliver power consumption reductions of up to 30 percent. When in 'active mode', the new LPDDR5 DRAM will automatically lower its voltage in accordance to different application's operating speed in order to save battery life. There's also a 'deep sleep mode' that cuts the power usage to a bare minimum. Samsung notes that the deep sleep mode cuts the power usage to approximately half the 'idle mode' of the current LPDDR4X DRAM.

"This development of 8Gb LPDDR5 represents a major step forward for low-power mobile memory solutions. We will continue to expand our next-generation 10nm-class DRAM lineup as we accelerate the move toward greater use of premium memory across the global landscape," Jinman Han, senior vice president of Memory Product Planning & Application Engineering at Samsung Electronics, said in a statement.