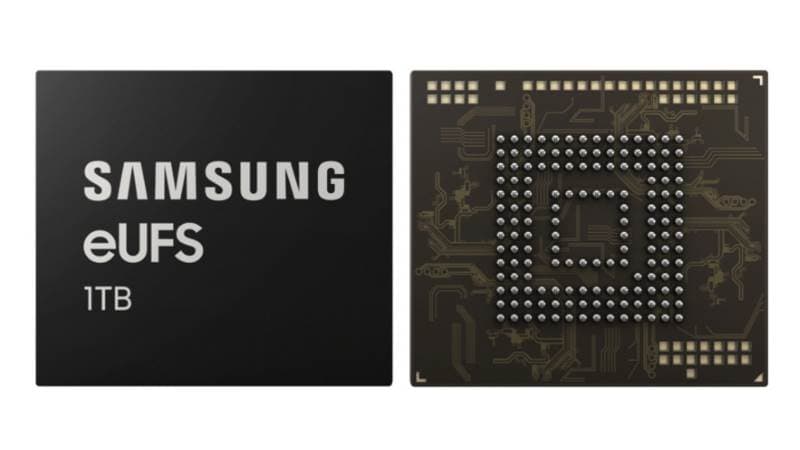 Just in time for the launch of the Samsung Galaxy S10 and potential unveiling of a premium foldable Galaxy F smartphone, Samsung has announced that it has begun mass producing eUFS embedded flash storage chips with a capacity of 1TB. This will allow for a huge increase in the storage capacities of smartphones and other compact devices, without the need for removable memory cards. This is twice the density of Samsung's previous top-end 512GB eUFS solution. The company expects strong demand and will sell its chips to other smartphone manufacturers in addition to using them in its own flagship products.

The 1TB chip uses the eUFS 2.1 standard and promises sequential read speeds of up to 1000MBps, which is just under twice as much as typical SATA SSDs used for notebook and desktop PCs. The sequential write speed is rated at 260MBps. Random read and write speeds are claimed to be up to 58,000 IOPS and 50,000 IOPS respectively, which the company says is 500x faster than what today's high-performance microSD cards can manage. These are all improvements over the company's own 512GB capacity eUFS, introduced in November 2017. Samsung points out that high-speed storage is essential when writing huge amounts of data continuously, such as when recording video at 960fps or with multiple cameras simultaneously.

The first UFS chips that Samsung developed had a capacity of 128GB, and were launched in January 2015. Since then, the company has periodically doubled capacities while increasing speeds. The company also tried to launch a removable UFS card standard in 2016 to replace microSD cards, but it never caught on.

These new chips measure the same 11.5mm x 13mm as the previous generation, allowing them to fit into smartphones where every last bit of space is valuable. The leap in capacity is possible thanks to Samsung's ability to stack 16 of its 5th Generation V-NAND dies. Each die has 96 layers of 3D stacked flash memory cells. The company also touts a new in-house controller.

Samsung was one of the first manufacturers to launch a smartphone with 512GB of storage, when it unveiled the Samsung Galaxy Note 9 (Review) in August 2018. At the time, the company also touted the ability to add a 512GB microSD card for a total of 1TB of storage. The company is promising to increase its manufacturing capacity throughout the first half of this year to support customers who want to put these chips into their next-generation flagship phones.