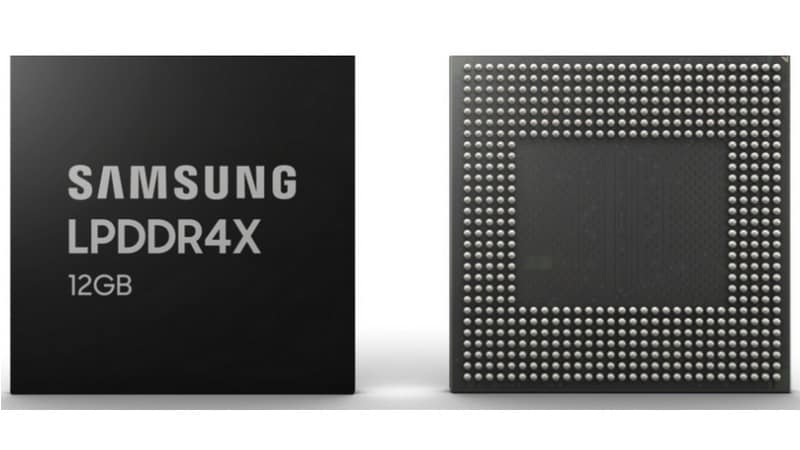 Samsung has kicked off the mass production of high-capacity 12GB LPDDR4X DRAM modules for high-end smartphones. Claimed to be the industry's first 12GB low-power double data rate 4X (LPDDR4X) package, Samsung's DRAM modules are tailor-made for the upcoming wave of premium smartphones that leverage technologies like a multi-camera setup, larger screens, 5G, and AI. The 12GB DRAM chips, based on Samsung's second-generation 10nm-class (1y-nm) process, are claimed to provide data transfer rate of 34.1GB/s and are also touted to be more efficient when it comes to power consumption.

To recall, Samsung began the mass production of its 10-nanometer-class (1y-nm) second generation 16Gb LPDDR4X DRAM modules with up to 8GB capacity back in July last year, aiming to provide the high-capacity DRAM chips for smartphones. The company's new LPDDR4X DRAM modules are just 1.1mm thin, which means they also cut down on the size and provide more space for fitting a larger battery, despite the increase in memory capacity. Samsung claims that the 12GB LPDDR4X DRAM modules will provide a more fluid multitasking experience and faster search response, and that they have been designed keeping in mind premium smartphones that are now embracing features such as five or more cameras, high-resolution screens, AI, and 5G among others.

Talking about the engineering behind Samsung's latest DRAM solution, the 12GB LPDDR4X modules were created by combining six 16-gigabit (Gb) LPDDR4X chips based on the second-generation 10nm-class (1y-nm) process into a single unit. Aside from providing a faster data transfer rate of up to 34.1GBps, Samsung notes that the 12GB modules also minimize power consumption that higher capacity modules require. As for the production, the company aims to increase the supply of its 1y-nm-based 8GB and 12GB LPDDR4X DRAM modules for smartphones by 300 percent in the second half of 2019 in anticipation of high demand.

Wonder Woman 1984 Is Not a Sequel to Wonder Woman, Its Makers Say
Huawei CFO Wanted to Quit Job Just Before Arrest, Says Founder