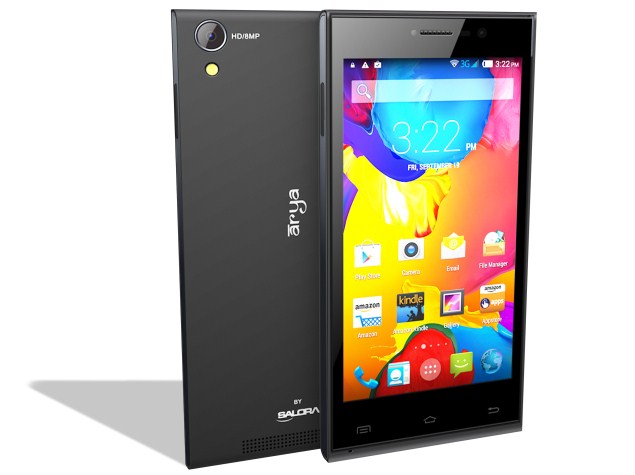 Salora, a domestic television manufacturer, on Saturday announced the first smartphone in its newly-launched brand called Arya. The Arya Z2 smartphone is available exclusively via Amazon India at Rs. 6,999, and comes with bundled an 8GB microSD card.

The Arya Z2 sports an 8-megapixel autofocus rear camera with a Sony BSI sensor, and a 2-megapixel front-facing camera. The built-in storage on the handset is 4GB, which is expandable via microSD card (unspecified maximum capacity).

Connectivity options on the Arya Z2 include GPRS/ EDGE, Wi-Fi, Bluetooth, USB OTG and 3G. It packs an 1800mAh battery which according to company is rated to deliver up to 8 hours of talk time on 3G network.

Commenting on the launch of the Arya Z2, Gopal Jiwarajka, CMD, Salora International Limited said "We are delighted to bring such a feature and spec rich device, at an aggressive price, to the Indian customer. Our partnership with Amazon and the service network we have across India, allows us to offer immense value to customers pan India. We intend to expand our portfolio in the next few months."

"We intend to start assembly of smartphones within 12 months in India. We are already making CRT, LED Television sets, home theatres, electronic components here. Manufacturing is in our blood. [...] We want to leverage our service infrastructure. Even Apple phones are made in China. Brand sustainability depends on service and promise. Salora has been in existence since last 37 years despite unhealthy business environment for the sector because of brand promise," Jiwarajka told PTI.

Salora International says that its Arya smartphone brand is backed by its own service network from 'SILCARE' which has over 250 service centers across 189 cities pan India. The company will replace its mobile phone under warranty condition if brought dead on arrival within 10 days of sale or it is not repaired within 7 days.

"On third repair of hardware within warranty condition the phone will be replaced with a new handset. Besides we will provide pick and drop facility of handsets in cities where we do not have our service centres," Jiwarajka said.