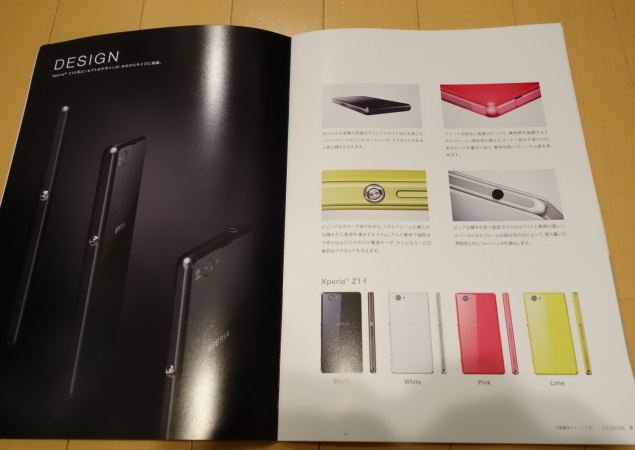 Some new images revealing the Sony Xperia Z1 mini, a.k.a. 'Xperia Z1 f' has leaked again. The new leaked images suggest that the rumoured Xperia Z1 mini will come in multiple colours, Black, Lime, Pink and White, unlike the original Xperia Z1 which comes in Black, Purple and White colours.

RBMen, has published a handful of images of the rumoured Xperia Z1 mini from leaked brochure documents from NTT DoCoMo Japan. According to the site, the NTT DoCoMo, a Japanese operator, will be introducing its all new winter smartphone line-up on October 10 and that the line-up also includes the yet to be officially unveiled Xperia Z1 mini.

There's no new information about the alleged device, but as more rumours fly across the Web, it seems quite plausible that Sony may be planning to release the alleged mini variant of the Xperia Z1 soon, which will be an affordable alternative to the flagship smartphone.

Earlier this month, the 'Xperia Z1 f' with model number SO-02F was leaked alongside the Xperia Z1 (SO-01F), which was launched last month at IFA 2013. The former was believed to be the yet-to-be-announced Xperia Z1 mini.

Rumoured specifications of the Sony Xperia Z1 mini include a quad-core 2.2GHz Snapdragon 800 processor, the same as we have seen on the Xperia Z1; a 4.3-inch TRILUMINOS display with 720x1280 pixels resolution; 16GB of inbuilt storage; 2GB of RAM, apart from a 2300mAh battery. It supposedly also boasts of IP55/IP58 certification (dust and water resistant), just like the Xperia Z, Xperia Z1 and Xperia Z Ultra.