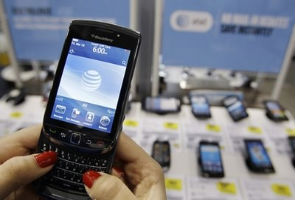 Highlights
The head of global sales at Research In Motion Ltd has resigned to take on a leadership role in another industry, the BlackBerry maker said on Wednesday, a major blow ahead of make-or-break product launches due later this year.

Patrick Spence was a 14-year RIM veteran widely considered a rising star. A spokeswoman for RIM said Spence's last day with the company will be June 15.

Spence was promoted to the global sales role in July after serving as managing director for Europe, the Middle East and Africa.

A source close to the company told the Globe and Mail newspaper that Spence likely stepped down after being passed over for the chief operating officer role recently filled by Kristian Tear, who spent most of his career at Sony Corp, Ericsson, and their Sony Ericsson mobile phone joint venture.

RIM has seen a steady stream of departures in the past year as its once-dominant market share has slipped amid fierce competition from Apple Inc and phones running on Google Inc's Android software.

Spence joined RIM soon after graduating from the University of Western Ontario, before the company had created its first BlackBerry smartphone.

RIM spokeswoman Tenille Kennedy said the sales function will report directly to Chief Executive Thorsten Heins on an interim basis before coming under Tear when he starts work in coming months. RIM did not name a replacement for Spence or say where he was going.

Heins replaced longtime co-CEOs Mike Lazaridis and Jim Balsillie, who stepped down in January, and has moved quickly to clear house. Other key executives have also exited the company in the past year.

The head of RIM's India unit left in November, its head of government relations left months before that, and former chief marketing officer Keith Pardy departed more than a year ago.

RIM said this month it had replaced Pardy with wireless veteran Frank Boulben, who has yet to start work.

Analysts expect RIM to struggle to sell its legacy devices - widely considered inferior to Apple's latest iPhone and high-end Android devices - for several quarters ahead of the planned launch of next-generation BlackBerry 10 phones later this year.

In July, RIM slashed 2,000 jobs, or about 11 percent of its workforce, to cut costs as sales and profit fell. Its developer relations and sales and marketing teams were particularly hard hit.

The company posted a loss in its most recent quarter on the back of a writedown on unsold inventory and a slump in phone shipments.