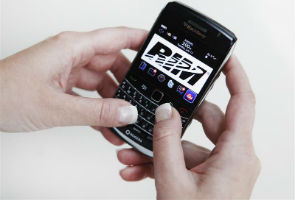 Shares of BlackBerry maker Research In Motion dove to a nine-year low Monday after Morgan Stanley downgraded the stock, saying RIM's challenges are piling up.

Morgan Stanley's Ehud Gelblum predicted Monday that shares would fall further because the company is facing a "triple whammy" in the current quarter. He set a price target of $7 on the stock, below predictions of most Wall Street analysts.

Gelblum says the Canadian company's phones are aging, growth in the global smartphone market is slowing, and shipments are likely to decline ahead of the launch of phones with the radical new BlackBerry 10 software.

The Waterloo, Ontario, company has been struggling to adapt to a world where Apple Inc.'s iPhone sets the standard for how a smartphone should work, and its sales have plummeted.

Gelblum expects BlackBerry 10 to bomb, leading to a more rapid decline in BlackBerry sales than other analysts have projected. He believes the company will have $7 billion in sales in the next fiscal year, which begins in March 2013. Analysts polled by FactSet expect it to pull in $12 billion.

A message left with RIM seeking comment Monday was not immediately returned.

Like other analysts, Gelblum is valuing RIM based on the value of its parts, not as an earnings-producing whole. The real value of the company is below the sum-of-the-parts valuation, he wrote, because the company is not winding down and selling off its parts immediately. For example, RIM makes money from operating the BlackBerry email system. It also sits on patents potentially worth billions.

He thinks it will continue to lose money making BlackBerrys, bringing the value of the company below the $15.50 per share he calculates for the sum of the parts.

Goldman Sachs analyst Simona Jankowski provided a counterpoint, saying RIM's earnings are likely to drop significantly, but that will partly be counteracted by cuts in operating expenses. She reiterated a "Neutral" rating and a $13 price target on RIM's shares in a report published Sunday.

RIM is scheduled to report results for its latest quarter on Thursday.