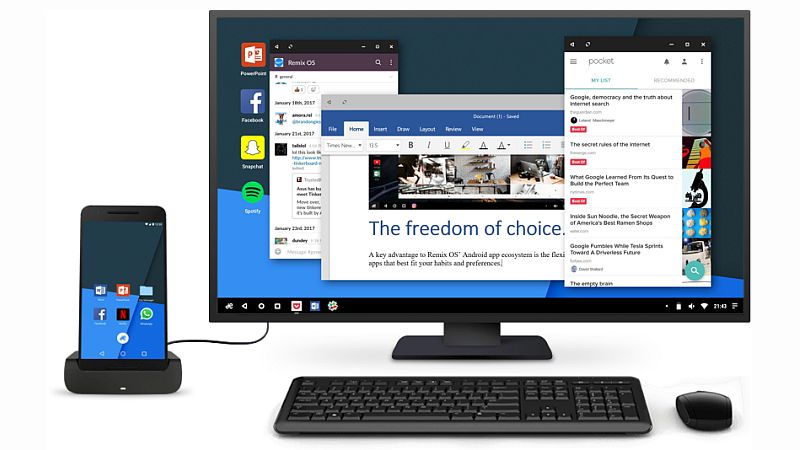 Jide Technology, which previously made it to news by creating a Microsoft Surface-like tablet as well as a version of Android for desktop PCs, announced on Tuesday its new Remix OS for Mobile which can turn your Android smartphone into a PC by connecting it to a monitor. The Remix OS for Mobile is Jide's new custom ROM for Android, and which can offer Windows 10-like Continuum features.

"Dock your phone with Remix Singularity into a monitor and experience everything that Remix OS has to offer," the dedicated page to the Remix OS for Mobile notes.

Jide's new Remix OS for Mobile is scheduled to be released in second half of 2017. The Continuum-like feature is dubbed Remix Singularity. Talking to The Verge, Jide Technology's co-founder David Ko said that the new ROM will be "as close to stock Android as possible." The smartphone once docked with the Singularity can serve as a full-fledged desktop computer when connected to a keyboard and mouse. The interface users will see is Remix OS, the company's version of Android for desktop PCs.

Explaining further, Ko added, "But imagine when you get back to your office or study, you connect your phone and it turns into a PC mode, just like a laptop or desktop." He stressed that the new feature has two advantages - cost and the Android ecosystem. Further, stressing on the positives about new ROM, Ko said that it will be free to download, and users can access all regular Android apps. One of the big disadvantages however is users will have to side-load Google Play store.

"In the next five years, roughly five billion people will be coming online and when they come online, their number one choice will be the smartphone; an affordable smartphone, and that will be an Android. If your phone can replace [your PC], it's a huge saving, and has a big impact to productivity," said Ko.

Ko also revealed that the company is looking for OEM partners to "sell phones that support Remix Singularity."

Considering that the Remix OS for Mobile is scheduled to be released in summer later this year, we can expect that Jide is still giving final polishes to the new ROM. For now, there's no clarity as to the dock itself, or which smartphones will be supported by the custom ROM.

Jide Technology is not the first company that has been working on promoting smartphones as dockable PC. Microsoft tried its hands with Coontinuum feature on Lumia 950 and Lumia 950 XL though results weren't very impressive. Similarly, Canonical' tried to bring the concept to tablets with its Ubuntu tablet that served as a desktop computer when connected to a keyboard and mouse.