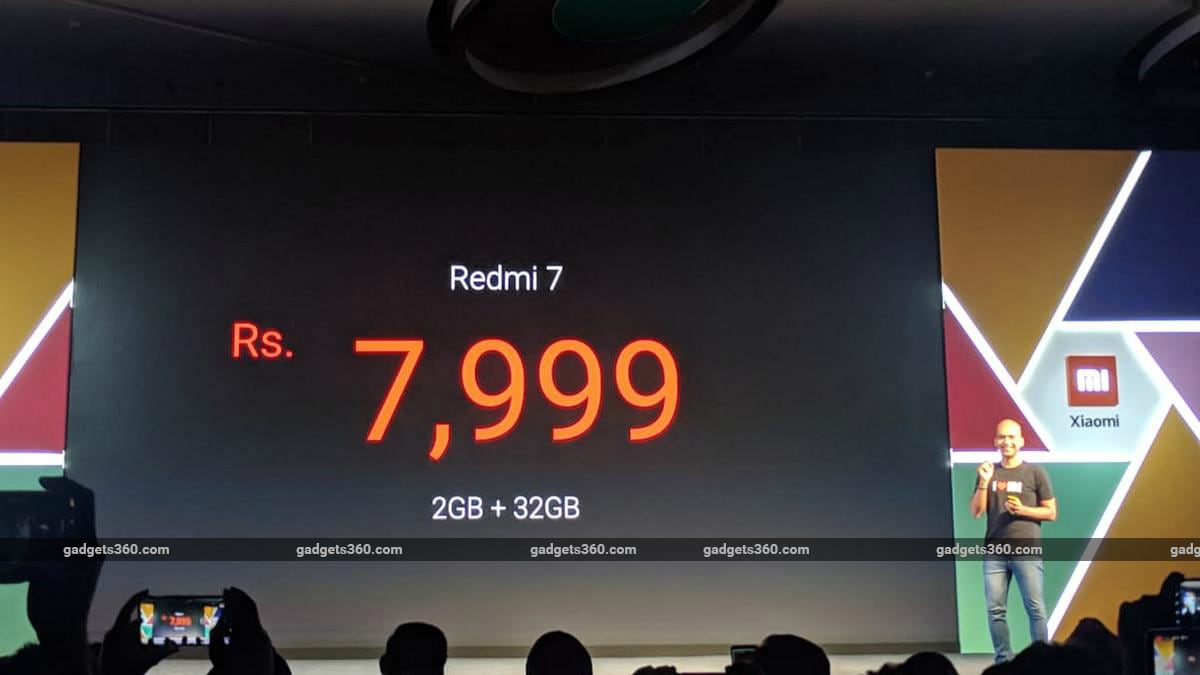 Redmi Y3 and Redmi 7 launch event began with Manu Kumar Jain, Managing Director, Xiaomi India, on the stage, who started with the various milestones that the company has achieved over the past year. Jain revealed the Xiaomi has setup 1,000 Mi Stores in over 300 cities in 19 states across the country. He claimed that these stores have been able to generate employment for over 2,000 people. The company is hoping to establish 10,000 offline retails stores, he added.

Jain then talked about the Xiaomi smartphone shipments and how smartphone adoption is the highest among the youth. Following which he revealed that Xiaomi is bringing Redmi Y3 as the successor to Redmi Y2 to India. He then invited Anuj Sharma, Chief Marketing Officer, Xiaomi India to detail the Redmi Y3.

Sharma began with Redmi Y3's selfie camera setup, which includes a 32-megapixel sensor. He noted that the sensor size of the Redmi Y3 selfie camera is 22.5 percent larger than the one present on Y2. He also detailed the various software enhancements, including AI Beautify, that Xiaomi has packed in the Redmi Y3 to make sure that the consumers are able to capture great selfies. Redmi Y3 packs AI Beautify version 4.0 as well as support for Auto HDR.

After the imaging capabilities, Sharma talked about the design and display of the phone, which sports an Aura Design with a 6.26-inch screen with Gorilla Glass 5. According to Sharma, the Redmi Y3 will be offered in Elegant Blue, Bold Red, and Prime Black colours. Among other specifications, the Redmi Y3 is packing a 4,000mAh battery, Snapdragon 636 SoC, and 3.5mm audio jack.

Sharma then reiterated Xiaomi's commitment to quality and he said that the company has not skimped on the same in the Redmi Y3. According to him, the phone also includes watertight seals.

After detailing the Redmi Y3, Sharma called Manu Kumar Jain back on the stage, who claimed that the Redmi Y3 is a massive upgrade over the Y2. He then announced that the Redmi Y3 will carry a price tag of Rs. 9,999 for 3GB + 32GB variant in the country. The 4GB + 64GB version will retail at Rs. 11,999 . The phone will go on sale beginning April 30 via Mi.com, Amazon, Mi Stores, and more.

Done with Redmi Y3, Jain moved on to the Redmi 7, which is also coming to India. He then invited Anuj Sharma back on the stage to detail the new Redmi 7. Sharma started by calling the phone "the ultimate all-rounder." Like the Y3, the Redmi 7 is also powered by Qualcomm Snapdragon 632 SoC. Sharma also revealed that the Redmi 7 packs a 4,000mAh battery.

Coming to the imaging capabilities of the phone, the Xiaomi executive stated that the new Redmi phone includes a dual camera setup with 12-megapixel and 2-megapixel sensors. According to Sharma, Xiaomi has added host of camera software enhancements, including AI Portrait mode and AI Scene Detection, in the Redmi 7. There is an 8-megapixel selfie shooter on the front as well.

Sharma then noted that the Redmi 7 comes with a 6.26-inch 19:9 HD+ Dot Notch display with the company's Aura Design and Gorilla Glass. The phone will be offered in Lunar Red, Comet Blue, and Eclipse Black colours.

According to the company executive, there is a fingerprint sensor onboard as well with dual-SIM support, 3.5mm audio jack, IR blaster, hydrophobic nano-coating, and a dedicated microSD card slot.

Manu Kumar Jain then joined back on the stage and stated that like the Y3, the Redmi 7 is also a significant upgrade over the Redmi 6. According to Jain, the Redmi 7 price in India will start at Rs. 7,999 for the 2GB + 32GB variant. The 3GB + 32GB version will carry a price tag of Rs. 8,999. The phone's first sale is scheduled for April 29 via Mi.com, Amazon, Mi Home stores, and more.

Finished with the new smartphones, Xiaomi then turned towards IoT devices. Jain revealed that the company is launching the Mi LED Smart Bulb in the country. The smart bulb supports both Alexa and Google Assistant . It will be available via a crowdfunding campaign on the company's official website beginning April 26.

This is it. Xiaomi launched a total of three devices in India - Redmi 7, Redmi Y3 and Mi LED Smart Bulb. You can check out a recap of the live stream below.