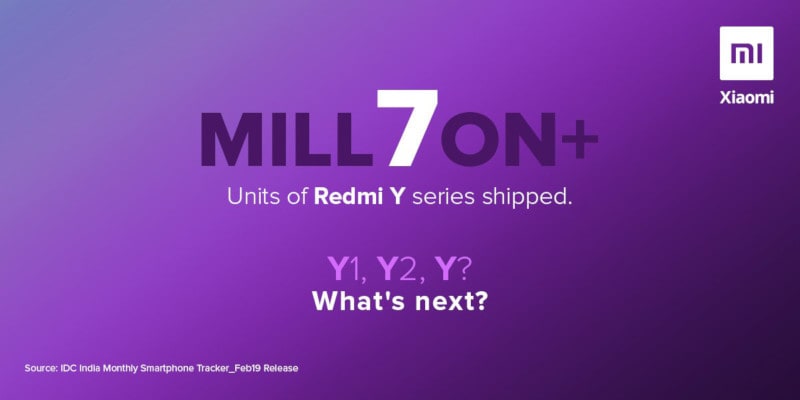 As Xiaomi prepares to launch the Redmi Y3 smartphone in India, the Chinese smartphone maker has revealed that it has shipped 7 million units of its Redmi Y-series smartphones in the country till date. The company is citing the IDC India Monthly Smartphone Tracker report for the shipment figures. Xiaomi had introduced the Redmi Y lineup in India with the launch of Redmi Y1 and Redmi Y1 Lite in late 2017. The company followed up with Redmi Y2 the next year. The upcoming Redmi Y3 will be the fourth smartphone in the lineup.

As per a press note shared by Xiaomi, the 7 million figure includes unit shipments of the Redmi Y1, Redmi Y1 Lite, and Redmi Y2 phones. The company has taken over a year to reach the milestone. Redmi Y-series is a part of Xiaomi's entry-level portfolio in the country and its smartphones come with increased youth focus and selfie capabilities. Same is going to be true for the upcoming Redmi Y3, which has already been teased to include a 32-megapixel selfie shooter on the front. The phone will be unveiled on April 24.

Citing the IDC India Monthly Smartphone Tracker report, the company had earlier boasted that it has been the number one smartphone brand in the country for six consecutive quarters from Q3 2017 to Q4 2018. According to IDC, the company had shipped a total of 41.1 million smartphone in 2018, including the Redmi Y-series, with a market share of 28.9 percent.