Redmi Note 7 Used as a Chopping Board, Nut Cracker in 'Test Videos' 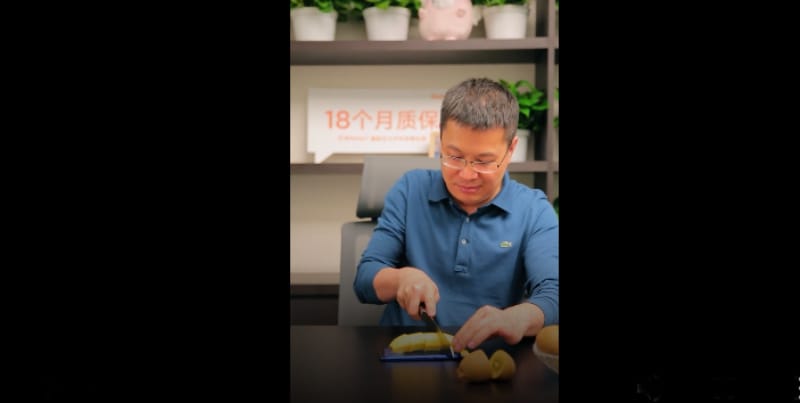 Xiaomi really wants people to know that the Redmi Note 7 is a durable and tough smartphone. It has rolled out videos of employees stomping on it, and has even thrown it down the staircase in a sealed garbage can. In a bizarre move, a user had even used it as a skate, and now Redmi CEO Lu Weibing is seen chopping vegetables on it. The latest endurance video shows fruits being cut on the Redmi Note 7 smartphone, and the device survives the ordeal without a scratch or damage on the display. Even Xiaomi President Lin Bin broke a walnut using the device, joining the madness.

The latest video (reposted below from YouTube) has Redmi CEO Lu Weibing chopping fruits on the Redmi Note 7. He is seen chopping kiwi, banana, and an apple on the smartphone. After he is done with this experiment, he picks up the phone to show that the Redmi Note 7 has survived the test and is working absolutely fine, with no damage to the display.

Xiaomi President and Co-Founder Lin Bin also got in on the madness and broke a walnut using the Redmi Note 7. Needless to say, the smartphone survived that as well.

Recently, as mentioned, it was also used as a skate and thrown down the stairs - a testament to its tough exterior. Of course, we'd urge readers to take all these videos with a pinch of salt, and recommend not trying such tests on your own smartphones back home.

The Redmi Note 7 was launched in China earlier this month, and is teased to arrive in India soon. The smartphone's major highlights include the 48-megapixel sensor present in its dual rear camera setup, a waterdrop-shaped notch, fingerprint sensor on the back panel, and a 4,000mAh battery. It recently also got the Super Night Scene Mode which allows users to take HDR photos in low-light areas.