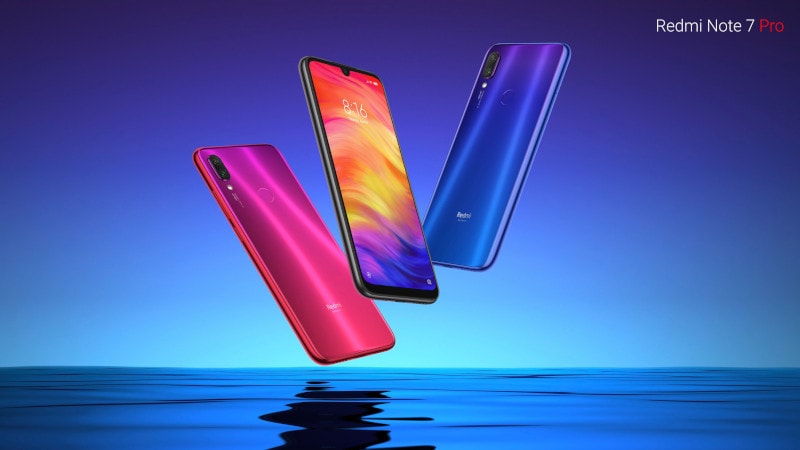 Xiaomi has priced the Redmi Note 7 Pro starting Rs. 13,999 for the 4GB + 64GB variant, whereas the 6GB + 128GB version will be offered at Rs. 16,999. The Chinese smartphone maker notes that the Redmi Note 7 Pro will be available starting March 13 (12pm) and it will be sold in three colours - Neptune Blue, Nebula Red, and Space Black. The first two colour variants come with a gradient finish on the back.

According to Xiaomi, the Redmi Note 7 Pro will be sold via Mi.com, Flipkart, and Mi Home stores, with select offline retailers to follow.

Xiaomi has also partnered with Airtel to provide offer the buyers of Redmi Note 7 Pro with up to 1,120GB of 4G data, unlimited calling, and Airtel Thanks benefits like free Airtel Data Secure, free access to Airtel TV premium, App advisor, Spam Block, Contacts Backup, and more. The phone will also come bundled with a free "ultra-slim" case.

The Redmi Note 7, which as we mentioned earlier was launched with the Note 7 Pro today, will go on sale beginning March 6 (12pm) in the country. It has been priced starting Rs. 9,999. The version of the Redmi Note 7 being introduced in the country is different from the one Xiaomi released in China. The company has mainly changed the rear camera setup.

The Redmi Note 7 Pro sports the same “Aura Design” as the Redmi Note 7 as well as the same 6.3-inch Full-HD+ screen with 19.5:9 aspect ratio and waterdrop-style notch (aka Dot Notch). Both front and back of the phone are covered by 2.5D curved Gorilla Glass 5 for added durability. The smartphone is powered by 11nm manufacturing process-based octa-core Qualcomm Snapdragon 675 SoC, coupled with 4GB/ 6GB of RAM, and 64GB/ 128GB of inbuilt storage with a microSD card slot (up to 256GB).

Among other specifications, the Redmi Note 7 Pro packs a dual camera setup on the back that includes a 48-megapixel primary sensor with f/1.79 lens and a 5-megapixel secondary depth sensor. The company has also added a number of artificial intelligence (AI) powered features in the camera app of the phone, including AI scene detection, AI Portrait 2.0, and Night mode.

Additionally, there is a 13-megapixel front shooter on the phone as well as support for 4K video recording on the rear camera.

The phone runs on Android Pie-based MIUI 10 and the company says that it has added enhanced system optimisations in the Redmi Note 7 Pro, which, Xiaomi claims, provide 10 percent faster system responsiveness. It has also included a 4,000mAh battery with Quick Charge 4.0 support in the phone.

Further, you will get a rear fingerprint sensor, USB Type-C port, 3.5mm audio jack, and dual-SIM support (hybrid). In terms of the connectivity capabilities, the Redmi Note 7 Pro gets 4G LTE, Wi-Fi 5, Bluetooth 5.0, and Infrared.

Samsung Galaxy A50, Galaxy A30, Galaxy A10 With Android 9 Pie Launched in India: Price, Specifications
Spotify vs Apple Music, Gaana, Google Play Music, JioSaavn, Amazon Music, and Others: How Does It Compare?