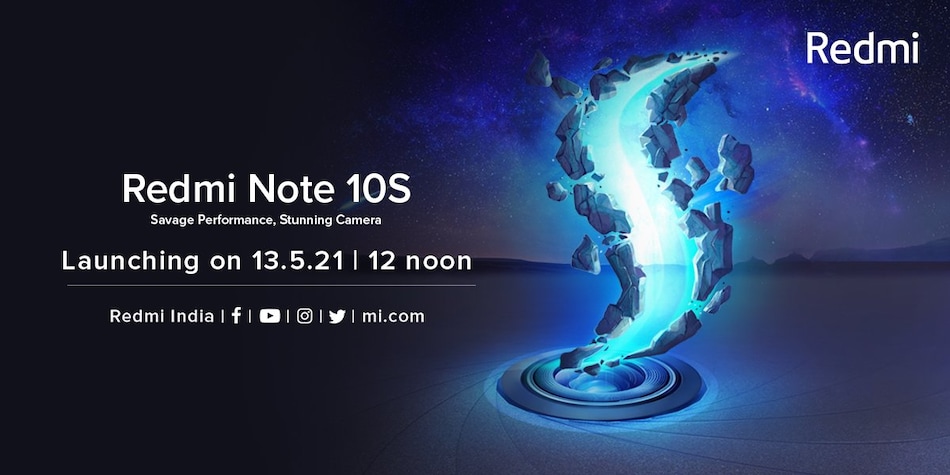 Redmi Note 10S has been confirmed to launch in the Indian market on May 13. The phone was leaked on several occasions in the past, and Xiaomi has finally confirmed its arrival. The launch event will be conducted virtually through the company's social media channels. Redmi Note 10S was unveiled globally in March and it comes with a 6.43-inch full-HD+ AMOLED hole-punch display. The phone is powered by the MediaTek Helio G95 SoC and is packs a 5,000mAh battery with 33W fast charging feature.

The upcoming Redmi Note 10S India launch event will begin on May 13 at 12pm (noon). Xiaomi will be hosting a ‘special #LaunchFromHome event' that will be live streamed via YouTube and other social media platforms. Details regarding its pricing and availability should be announced at the event.

If we were to speculate, the Redmi Note 10S should priced be somewhere in the range of Redmi Note 10, that is priced starting at Rs. 12,499 currently. In a recent teaser, the phone was teased to come in three colour options — Blue, Dark Grey, and White. A recent leak suggested that Redmi Note 10S will launch in India in three storage configurations — 6GB + 64GB, 6GB + 128GB, and 8GB + 128GB.

If the variant launched in India matches the specifications of the global model, we know the Redmi Note 10S runs on Android 11-based MIUI 12.5. It features a 6.43-inch full-HD+ (1,080x2,400 pixels) AMOLED display with low blue light certification by SGS and 1,100nits peak brightness. The phone is powered by the MediaTek Helio G95 SoC paired with up to 8GB of RAM. Internal storage is listed to be up to 128GB.