Redmi K50 Gaming Edition is claimed to be fully charged in 17 minutes. 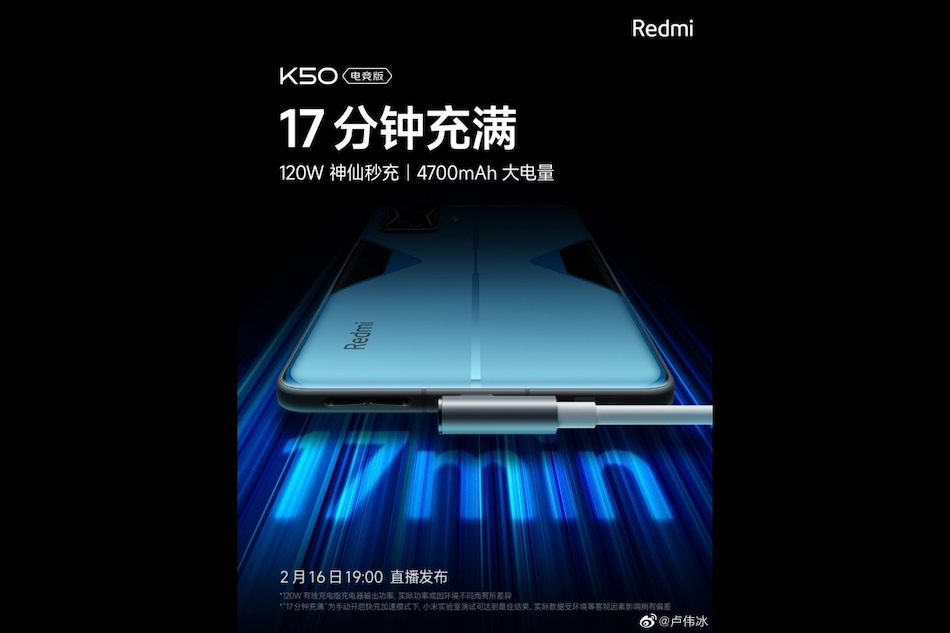 Redmi K50 series launch in China has been scheduled for February 16. Ahead of its launch, a Xiaomi executive has shared some key specifications of one of the smartphones in the lineup — Redmi K50 Gaming Edition. The smartphone will pack a 4,700mAh battery with an impressive fast charging speed. The smartphone is claimed to be the fastest charging smartphone equipped with a Snapdragon 8 Gen 1 SoC. Additionally, Redmi has also announced a partnership with Mercedes-AMG Petronas F1 team, hinting at a special edition smartphone.

Through a post on the Chinese microblogging site Weibo, Redmi General Manager Lu Weibing confirmed the battery and charging specifications of the upcoming Redmi K50 Gaming Edition. As mentioned, the gaming smartphone from Redmi will pack a 4,700mAh battery and it will support 120W fast charging. The smartphone can be fully charged (from zero to 100 percent) in around 17 minutes. Weibing claims Redmi K50 Gaming Edition is the fastest-charging smartphone powered by the Snapdragon 8 Gen 1 SoC.

However, the post also mentions that the 17-minutes charge time is achieved when the fast-charging acceleration mode is manually turned on in the device.

Through a post on Weibo, Redmi announced a partnership with multiple-time F1 World Championship-winning team Mercedes-AMG Petronas. However, the post did not share much detail about the partnership but hints that a special Redmi K50 Mercedes F1 smartphone could be in the works.