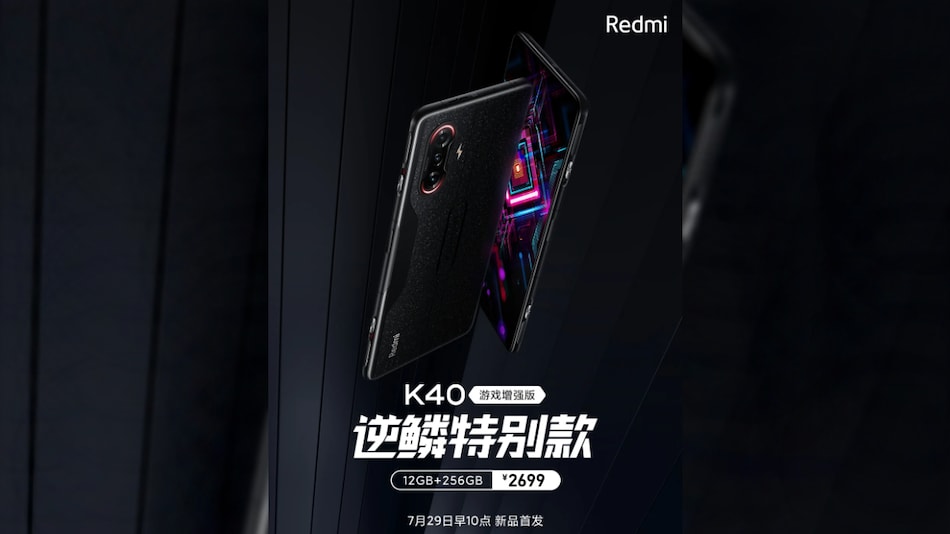 Redmi K40 Gaming Edition Inverse Scale colour option has been launched in China. The new finish has a black pattern with silver trigger buttons on the side. The company has announced pricing and sale details of the phone. Specifications are identical to the Redmi K40 Gaming Edition that was launched in April. This phone was launched in the Indian market as Poco F3 GT. Separately, details about the Redmi K50 series has also cropped up online and leaks claim the phones may be powered by the Qualcomm Snapdragon 895 SoC.

Xiaomi took to Weibo to announce the Redmi K40 Gaming Edition Inverse Scale colour option. It has a unique black patterned back, pop-up shoulder buttons with a silver hint, and red LED glow on the sides of the camera module. The Inverse Scale model has launched in a single 12GB + 256GB storage option and is priced at CNY 2,699 (roughly Rs. 30,900). It will go on sale via online sites in China starting July 29.

Specifications of the Redmi K40 Gaming Edition Inverse Scale model remain the same as the original. The phone features a 6.67-inch AMOLED panel with 120Hz refresh rate and is powered by the MediaTek Dimensity 1200 SoC. It packs a 5,065mAh battery with 67W fast charging support. At the front, there is a 16-megapixel selfie camera and the triple camera setup at the back houses a 64-megapixel main camera. It features a side-mounted fingerprint sensor.

Coming to the successor — Redmi K50 series — Chinese tipster Panda is bald (translated) posted on Weibo that the range will feature a hole-punch display that is centred. It is likely to be powered by the Qualcomm Snapdragon 895 SoC and come with 67W fast charging support. Separately, tipster Digital Chat Station shared that the lineup may have an E5 ‘luminescent material' display from Samsung. The display is expected to come with 2K resolution and feature 120Hz refresh rate. There is no clarity on when the Redmi K50 range will be unveiled, but it is likely to include models such as Redmi K50, Redmi K50 Pro, and Redmi K50 Pro+.