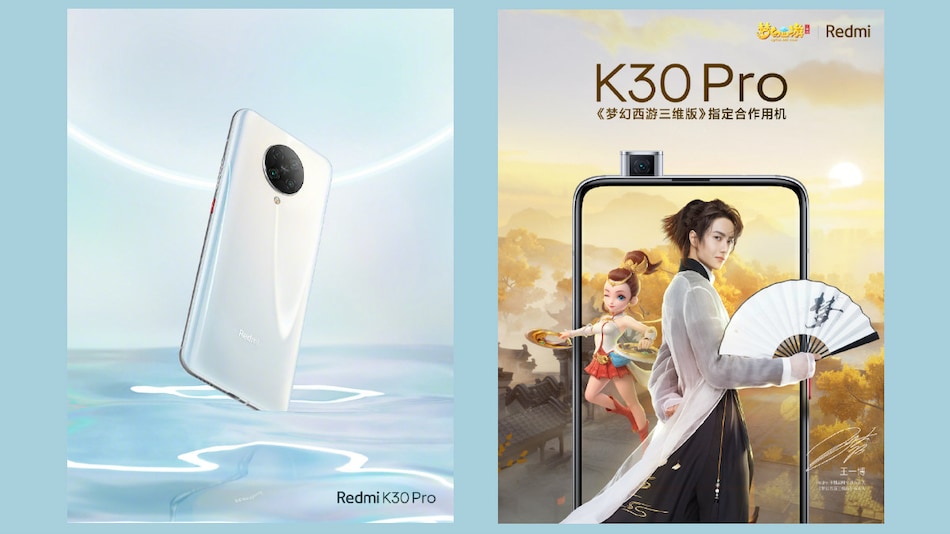 Redmi K30 Pro has been shown off in new teaser images ahead of its launch next week. The first image shows the smartphone in a white colour option, while the second image confirms that the phone will be featuring a pop-up selfie camera at the front and a full-screen display. Additionally, other images that have been shared also suggest that the Redmi K30 Pro's linear vibration motor will offer superior tactile feedback and fast response times. The upcoming Redmi K30 Pro is scheduled to launch in China on March 24, 2020.

Both the images have been shared by Redmi's official handle on the Chinese micro-blogging website, Weibo. The first image shows the Redmi K30 Pro in a white hue. The rear looks to be featuring a glass finish. Additionally, the image also shows that the smartphone has a metallic frame and a red coloured power button.

Moving on to the second image, it is confirmed that the phone will be having a pop-up camera - as speculated from the previous teaser image shown earlier this week - at the front for selfies along with a notchless display for that all-screen experience. The image also features characters from the Fantasy Westward Journey 3D game which could be a hint towards a limited-edition Redmi K30 Pro in the works.

Apart from all this, more photos confirm that the Redmi K30 Pro will be featuring Game Turbo 3.0 and its display is TUV certified. Moreover, the company is claiming to have improved the vibration motor on the smartphone and it is now optimised for 153 MIUI scenarios.

As we mentioned above, the Redmi K30 Pro is scheduled to launch on March 24 and it is confirmed to debut with Qualcomm's flagship Snapdragon 865 SoC. Stay tuned with us for upcoming details about this smartphone.