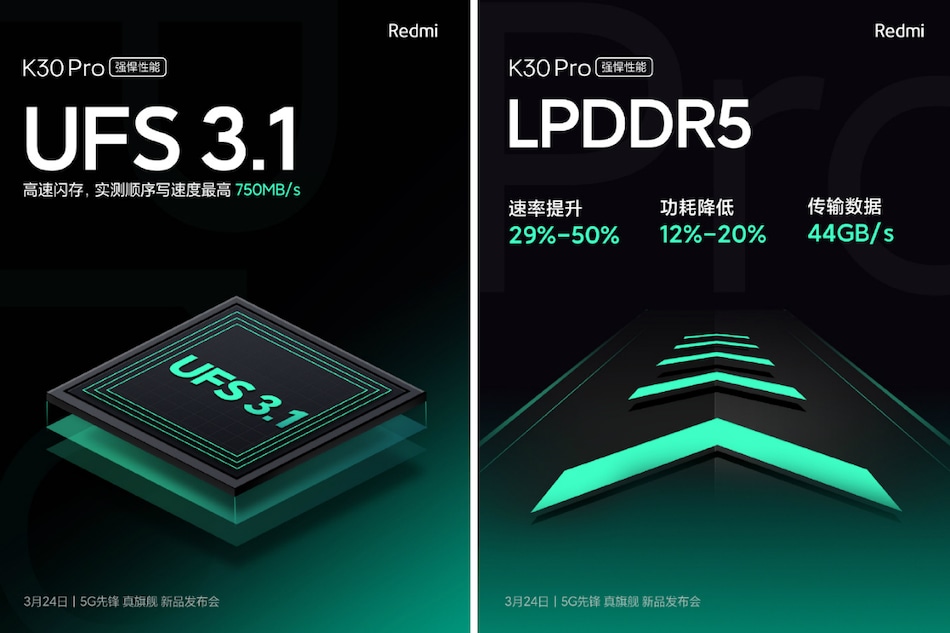 Redmi K30 Pro has been teased to debut with UFS 3.1 storage and include a proprietary VC liquid cooling technology. Earlier on Tuesday, Xiaomi sub-brand Redmi announced that it is launching the Redmi K30 Pro in China as its next-generation flagship on March 24. The new smartphone will come with a quad rear camera setup that will have a 64-megapixel primary sensor. In addition to the teasers released by the sub-brand, Redmi General Manager and Xiaomi President of China Region Lu Weibing has posted a brief comparison between the Redmi K30 Pro and the Honor V30 Pro.

The Redmi account on Weibo has posted the teaser showing UFS 3.1 storage on the Redmi K30 Pro. The new storage standard is claimed to deliver write speeds of up to 750 Mbps on the device. Redmi chief Lu Weibing has posted a video through his Weibo account that compares the storage performance between the Redmi K30 Pro and the Honor V30 Pro. He has also mentioned that UFS 3.1 provides a greatly improved experience over the existing UFS 3.0.

In addition to UFS 3.1, teasers on the Redmi Weibo account show that the Redmi K30 Pro will have the custom VC liquid cooling technology. The new offering is touted to provide a promising heat dissipation performance using a 3,435 square millimetres of liquid-cooled heat sink.

The Redmi K30 Pro has also been teased to come with LPRDD5 RAM. We earlier saw the same memory chip in the Mi 10 and Mi 10 Pro.

If we look at the past reports, Xiaomi has already confirmed the Qualcomm Snapdragon 865 SoC on the Redmi K30 Pro. There will also be 5G support. Further, the smartphone will come with a pop-up selfie camera, just like the Redmi K20 and Redmi K20 Pro.

The official launch of the Redmi K30 Pro is scheduled for March 24. In the meantime, it is safe to expect some new teasers and rumours surfacing online with some key specifications of the latest flagship.