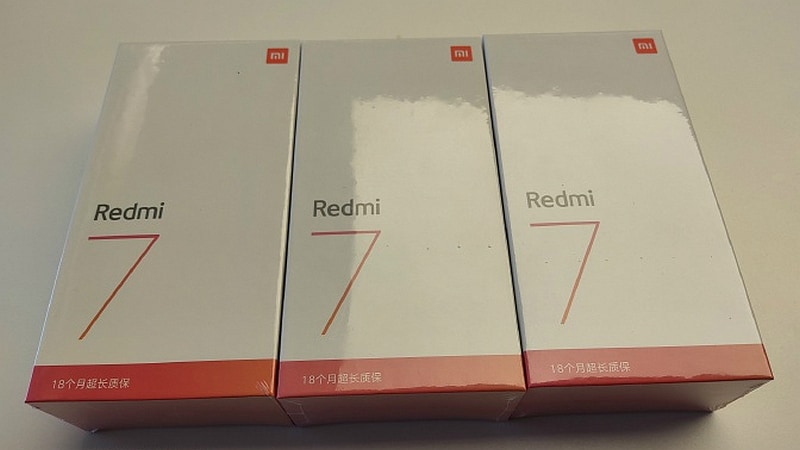 Redmi 7 retail box has been teased by Redmi General Manager Lu Weibing. The new development comes just after Weibing confirmed that the Redmi 7 will launch in China on March 18 -- alongside the Redmi Note 7 Pro. Separately, the official Redmi account on Weibo has confirmed that the Redmi 7 will come with a large, 4,000mAh battery. This is touted to enable 15 days of standby time on a single charge. The Redmi 7 is rumoured to come with a Qualcomm Snapdragon 632 SoC along with up to 4GB of RAM.

Weibing in a Weibo post on Tuesday teased the retail box of the Redmi 7. This is presumably to showcase that Xiaomi is ready to kick off the sale of the new Redmi model that will come alongside the Redmi Note 7 Pro.

Xiaomi has a record of selling a large number of its smartphones soon after their launch in China. For instance, it surpassed the mark of one million sales of the Redmi Note 7 in three weeks of its launch in the country last month.

In addition to the teaser showing off the retail box, the official Redmi account on Weibo on Tuesday confirmed the battery capacity of the Redmi 7. The Weibo post mentioned that the just like the Redmi Note 7 Pro, the Redmi 7 will come with a 4,000mAh battery. This is notably larger than the 3,000mAh battery available on the Redmi 6. Furthermore, the large battery capacity is claimed to deliver 15 days of standby time on a single charge.

To recall, Weibing recently confirmed that Xiaomi is set to launch the Redmi 7 in China on March 18. This will be alongside the arrival of the China Redmi Note 7 Pro variant that may have some differences from what was launched in India late last month.

The teaser image confirming the launch date of the Redmi 7 highlighted a waterdrop-style display notch on the upcoming phone alongside a gradient-finish back panel, sporting a fingerprint sensor and a dual rear camera setup.

A TENAA listing revealing a Redmi handset with model number M1810F6LE suggested the key specifications of the Redmi 7. The phone would feature a 6.26-inch HD+ display, 3,900mAh battery, and Android Pie. Similarly, it is found to have an octa-core processor along with 2GB, 3GB, and 4GB RAM options, and 16GB, 32GB, and 64GB of onboard storage versions. There could be a Snapdragon 632 SoC if we believe a recent hands-on video.

The listing on the TENAA website also suggested that the Redmi 7 would have various colour variants, including Black, Blue, Green, Grey, Pink, Purple, Red, and White. Also, it specified that the device measures 158.65x76.43x8.47mm and weighs 180 grams.

The Redmi 7 is expected to come with a starting price of CNY 900 (roughly Rs. 9,300). Moreover, Xiaomi CEO Lei Jun in a recent post mentioned that the Redmi 7 would come with a 3.5mm headphone jack and an infrared (IR) blaster.