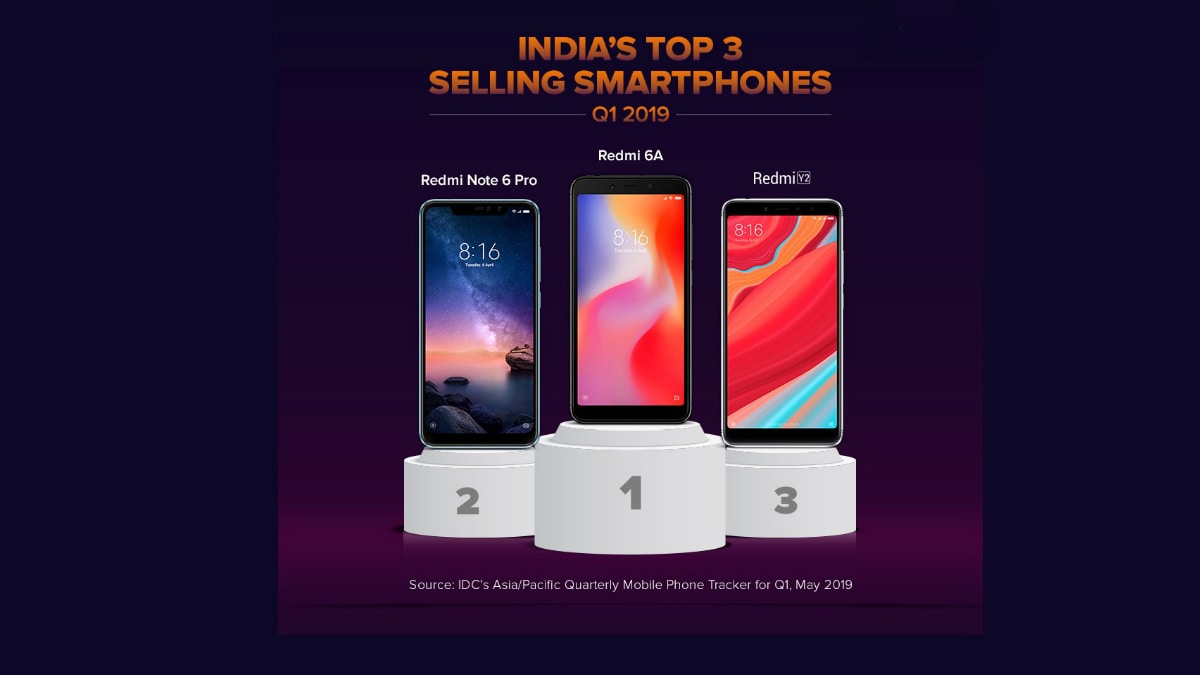 The bestselling phones in India in Q1 2019 were revealed by IDC.

It appears that Xiaomi's reign at the top of the Indian smartphone market is thanks to the adoption of its most entry-level handsets. The Redmi 6A is the top selling phone in India in Q1 2019, according to IDC. The top three spots are all taken by Xiaomi phones, with the Redmi Note 6 Pro coming in second and the Redmi Y2 coming in at third. IDC has confirmed to Gadgets 360 that the Redmi 6A smartphone sold 3 million units in Q1 2019, and managed to rake in the most market share at 9.5 percent in total.

To take the second spot, 1.5 million Redmi Note 6 Pro units were sold in the same quarter raking in 4.8 percent market share. Similarly, 1.23 million units of the Redmi Y2 were sold in the first quarter, taking in the third spot on the list, and raking in 3.8 percent market share. Furthermore, Global VP Manu Kumar Jain further cites IDC to assert that seven out of 10 phones on the top selling list for Q1 2019 are Xiaomi phones, with the above mentioned phones taking the top three spots. The list includes the Redmi 6 Pro at the 7th spot, Redmi 6 at the 8th spot, Redmi Note 7 at the 9th spot, and Redmi Go and the 10th spot.

The Samsung Galaxy M20 and Samsung Galaxy J2 Core sit on the fourth and fifth position on the list, and the sixth position is taken by the Vivo V15 Pro. As we mentioned, IDC has confirmed the data to Gadgets 360.

Upasana Joshi, Associate Research Manager, Client Devices, IDC India, in a statement to Gadgets 360, said, "Xiaomi has been consistently leading the smartphone market now for 7 consecutive quarters at the back of aggressively priced high spec models along with heavy promotional campaigns. Online channel which now constitutes to 40.2 percent of overall smartphone market in 1Q19, has played a pivotal role in raising this bar so high along with Xiaomi's own website (Mi.com) which also contributes largely to its sales volumes. Having said this, within the offline channel too, the brand has been able to establish strong footprints through its Mi Preferred partner program, own Mi stores and the channel ecosystem is upbeat about partnering with Xiaomi."

"2019, will be a crucial year for Xiaomi as it would be required to scale up the previously generated existing high volumes and demand and match the fierce landscape where other online heavy brands like Realme, Honor, Asus, and close competition Samsung will be fighting for the market pie with equivalent specification models at almost levelling prices. Omnichannel presence for any vendor is a must to say competitive in India market and all the online heavy brands realised it very soon, thus foraying into the offline channel at a fast pace. Hence keeping steady stride in the online channel along with growth and penetration into the offline market will be essentials for above mentioned brands along with Xiaomi to sustain themselves in the longer run," she added.

In its latest report, IDC states that Xiaomi is leading the Indian smartphone market share in Q1 2019 with 30.6 percent stake. The company managed to sell a total of 9.8 million phone units in the timeframe, up from last year's 9.1 million in the same quarter. IDC further notes that the company grew year-on-year (YoY) by 8.1 percent in Q1 2019, and it also continued to dominate the online channel with 48.6 percent share in the first quarter.

Samsung took the second spot with 22.3 percent market share and shipping 7.2 million units in the first quarter. Samsung surpassed Apple for the leadership position in the premium ($500+) segment with an overall share of 36 percent in Q1 2019 due to its newly launched Galaxy S10 series that was supported by huge marketing campaigns.