Redmi 10 is teased to sport a side-mounted fingerprint scanner. 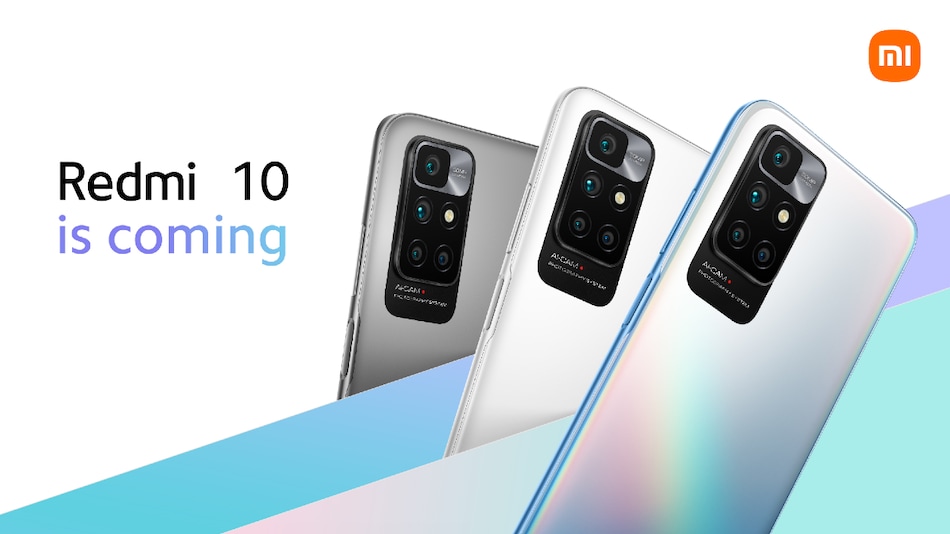 Redmi 10 is launching soon, Xiaomi has confirmed. The new smartphone has been teased officially, although a specific launch date is not known yet. Redmi 10's design has also been partially revealed in a teaser poster. The phone is teased to have a quad rear camera setup with a 50-megapixel main sensor. Past leaks suggest that Redmi 10 may feature a hole-punch display and be powered by the MediaTek Helio G88 SoC. It is reported to pack a 5,000mAh battery.

Xiaomi took to Twitter to officially announce the arrival of Redmi 10. The company partly showed the design of the phone. In the teaser, Redmi 10 is seen to come in at least three colour options — all with glossy finishes. The phone has a rectangular-shaped camera module placed on the top left corner of the back panel. The module houses quad rear cameras and a flash. The camera module also clearly shows “50MP Camera” printed on it. There is also a side-mounted fingerprint sensor, as spotted in the poster. Redmi 10 exact launch date is not yet revealed, but it is teased as “coming soon.”

Redmi 10 was recently spotted in a Xiaomi blog post briefly, that was erroneously posted, and it leaked important information about the phone. It is likely to come in three different RAM + storage configurations — 4GB + 64GB, 4GB + 128GB, and 6GB + 128GB. Colour options may include Carbon Gray, Pebble White, and Sea Blue.

The blog leaked most of the specifications of the Redmi 10 ahead of official launch. The handset is tipped to support dual-SIM (Nano) slots and run on Android 11 with MIUI 12.5 on top. It is likely to feature a 6.5-inch full-HD+ (1,080x2,400 pixels) hole-punch display along with a 90Hz adaptive refresh rate and it may be powered by an octa-core MediaTek Helio G88 SoC. RAM options of up to 6GB and storage options of up to 128GB may be offered.

It's a John Cena double-header this week on Orbital, the Gadgets 360 podcast, as we discuss The Suicide Squad, and later, Fast & Furious 9 (from 28:03). Orbital is available on Apple Podcasts, Google Podcasts, Spotify, Amazon Music and wherever you get your podcasts.
Affiliate links may be automatically generated - see our ethics statement for details.

Gaming Curbs in China: Youth React to Restrictions on Titles Such as Honor of Kings With Anguish and Cunning
Free Guy 2 Announced by Ryan Reynolds, as Free Guy Box Office Opens to $51 Million Opening Weekend