Realme 6i was previously spotted on a number of listings including Geekbench which showed the phone will come with Android 10. 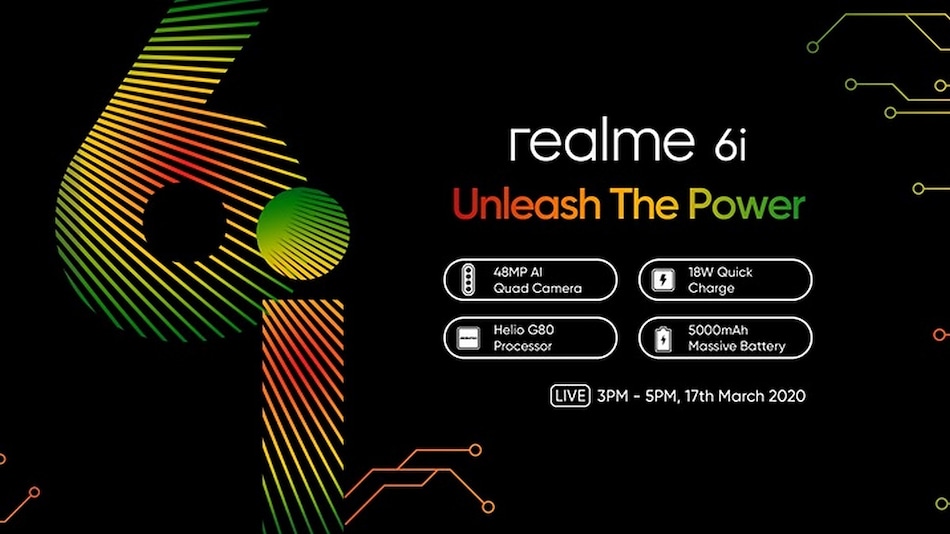 Realme 6i will have 48-megapixel rear camera setup

Realme 6i is now confirmed to come with a 16-megapixel selfie shooter in a watedrop-shaped display notch design and a 5,000mAh battery, thanks to the latest teasers on the company's Myanmar Facebook page. The phone, which will be announced on Tuesday, March 17 at 3pm MMT (2pm IST), will be powered by a MediaTek Helio G80 SoC, which was released last month. The Chinese smartphone maker states it will be “live” but has not confirmed if the event will be an online only affair. The Realme 6i has popped up on various listings in the recent past with the model number RMX2040, hinting at some of the specifications.

The first poster released by Realme on its Myanmar Facebook page has the tag line “Unleash the Power” along with some specifications for the Realme 6i. It is now confirmed to come with a massive 5,000mAh battery. To recall, the company teased 18W quick charging through an older Facebook post.

Another new Facebook post states the front camera will be a 16-megapixel sensor with AI housed in a waterdrop-shaped dislpay design. Further, it states the previously confirmed MediaTek Helio G80 SoC which was launched just last month, making the Realme 6i the first phone to use this chip. The Helio G80 has two Cortex-A75 cores with a maximum clock speed of 2GHz and six Cortex-A55 cores clocked at 1.8GHz. It is also known that there is a 48-megapixel primary camera on the back which as part of a quad camera setup, There is no information on the rest of the sensors as of yet. The teaser also point to a USB Type-C port for charging which is an upgrade from the Micro-USB present on the Realme 5i.

An phone carrying the RMX2040 which is suspected to be the Realme 6i was also recently spotted on Geekbench and the listing states the phone runs Android 10 and has at least 4GB of RAM. It got a single-core score of 345 and a multi-core score of 1,293. An FCC listing of the same model number showed the presence of a 3.5mm headphone jack and a fingerprint sensor on the back. It also suggested the weight and dimensions to be 195 grams and 164.4x75.4x9mm respectively.