A Realme phone rumoured to be Realme X50 Pro Player Edition was spotted on TENAA, tipping RAM and storage options. 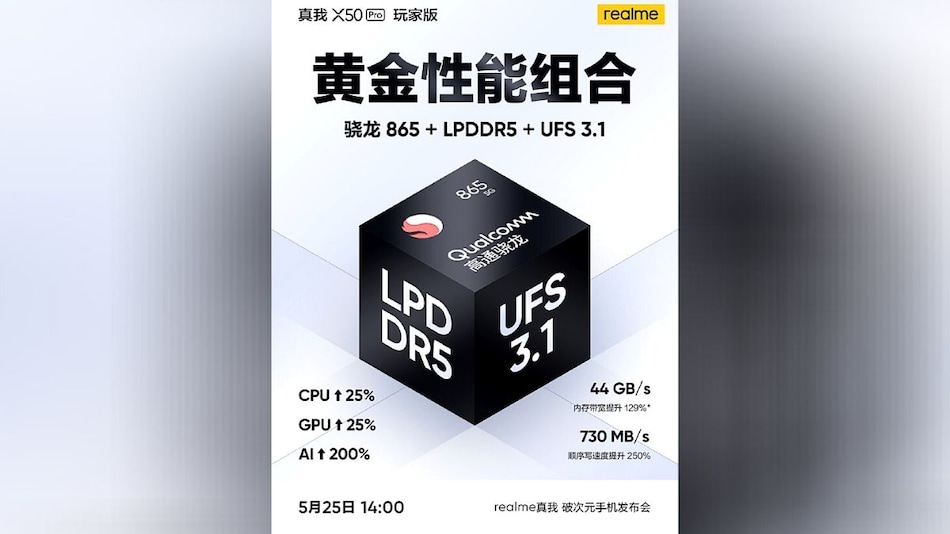 Realme X50 Pro Player Edition was confirmed to be launched on May 25 by Realme last week. Now ahead of its launch, the company has revealed that the upcoming Realme phone will be powered by Qualcomm Snapdragon 865 SoC and will pack LPDDR5 RAM and UFS 3.1 storage. Meanwhile, the phone was also spotted on China's regulatory body TENAA's website, indicating its key specifications. Additionally, a notable tipster has also tipped the alleged pricing and camera details of the upcoming Realme phone. From the alleged specifications, it is speculated that the Realme X50 Pro Player Edition will come with downgraded cameras compared to the Realme X50 Pro 5G.

Last week, Realme via its Weibo account confirmed that the Reame X50 Pro Player Edition will come with quad rear cameras - similar to the Realme X50 Pro 5G that was launched in India in February. Through a new post on the Chinese micro-blogging site today, Realme has confirmed the that the phone will be powered by Qualcomm Snapdragon 865 SoC and will pack LPDDR5 RAM and UFS 3.1 storage. Moreover, a separate post revealed that the phone will come with 5G support and Wi-Fi 6.

The TENAA website also hinted that the Realme X50 Pro Player Edition will carry an in-display fingerprint sensor along with gravity sensor, distance sensor, and light sensor. Lastly, it was highlighted that the phone will measure 159.0×74.2×8.9mm and weigh 209 grams, adding that there's a 2,055mAh battery as well. The battery capacity listed on TENAA is likely wrong.

A notable tipster, Digital Chat Station (translated) further indicated that the quad rear camera setup will include a 48-megapixel main camera, instead of a 64-megapixel primary camera as seen on Realme X50 Pro 5G. The tipster claimed that there will also be an 8-megapixel secondary camera along with two more 2-megapixel shooters. The same rear camera specifications were highlighted in TENAA listing. It was added that the phone will come with a dual selfie camera setup that will include a 16-megapixel camera and a 2-megapixel camera. Additionally, the tipster claims that Realme X50 Pro Player Edition will pack a 4,200mAh battery, which is more likely to be accurate than the 2,055mAh listed on TENAA.