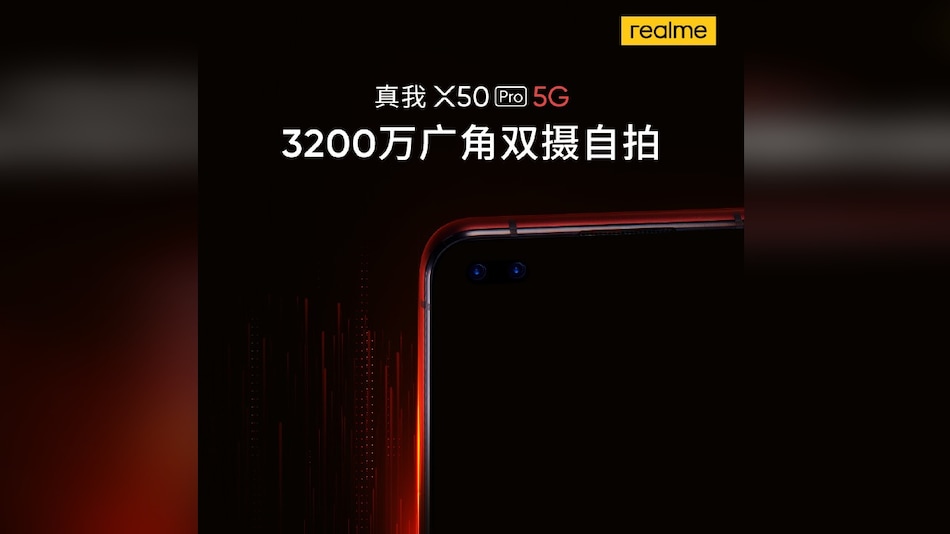 Realme X50 Pro 5G will be launched on February 24

Realme X50 Pro 5G has received a few more teasers ahead of its launch next week in India. After revealing features like a 90Hz AMOLED display, quad rear cameras with 20x hybrid zoom, and 65W fast charging for the flagship phone, Realme has announced that Realme X50 Pro 5G will pack a 32-megapixel dual selfie camera setup. Additionally, the Oppo spin-off has divulged that its upcoming 5G flagship phone will be available in two colour options, one of which we've already seen in a teaser image shared earlier this week.

The official Realme Weibo account mentioned in a post that the Realme X50 Pro 5G will pack a dual 32-megapixel selfie camera setup. The main snapper will be a 32-megapixel wide-angle lens with a 105-degree field of view. It will be backed by what Realme calls “UIS Max Super Video Stabilization”, which as the name suggests, will help in negating hand movements to capture more stable videos and blur-free photos. There is no word on the resolution of the second selfie camera, but we expect it to be a depth sensor for capturing portrait shots.

Realme X50 Pro 5G's dual front cameras will be housed in a pill-shaped hole-punch, something that is clearly visible in the teaser image. On the other hand, Realme's official event site has made it clear that the company's upcoming phone will be available in Rust Red and Moss Green colour options. The teaser images have already given us a glimpse of what the Rust Red variant will look like. Realme X50 Pro 5G will pack a quad rear camera setup with a 64-megapixel main snapper and 20x hybrid zoom support. We'll get to know more about the phone as its February 24 launch inches closer.