Realme X50 5G has been confirmed to launch on January 7 in China. 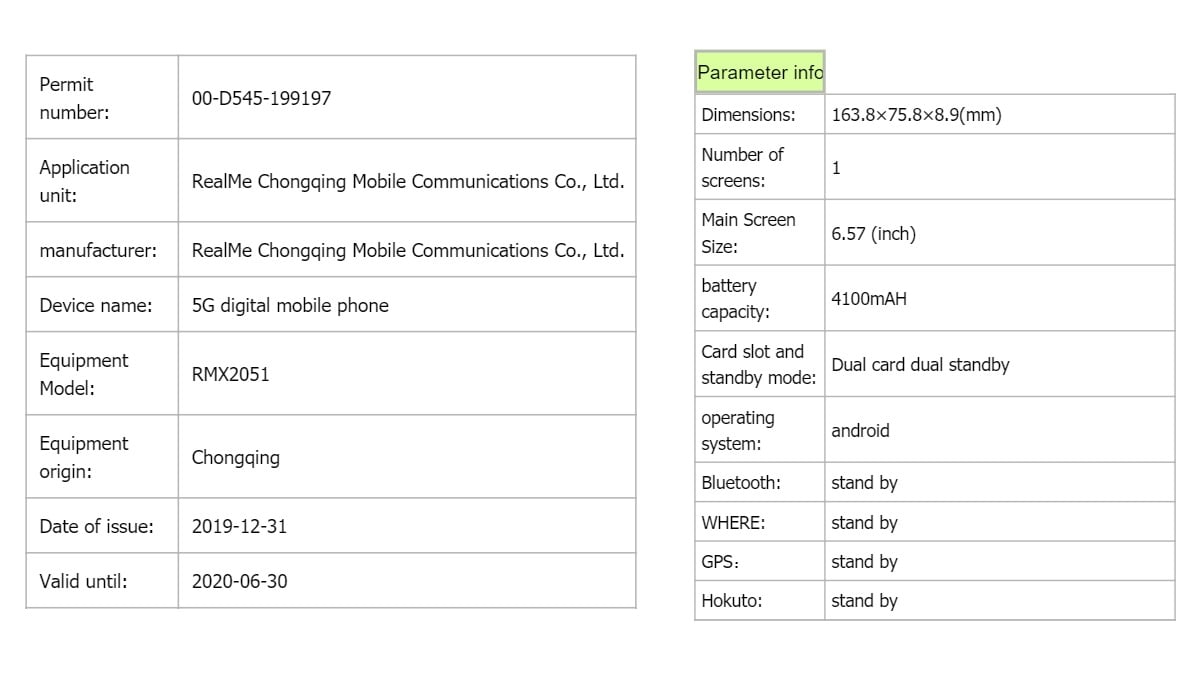 Realme is all set to launch its first 5G phone - the Realme X50 5G - on January 7 in China. After appearing in numerous leaks and official teasers, the Realme X50 5G has now been spotted on TENAA, revealing some of its key specifications. Carrying the model number RMX2051, the phone's TENAA listing hasn't been updated with images yet, but the certification database mentions that it will pack a 4,100mAh battery. Additionally, the phone is tipped to feature a 6.57-inch display, but no details of its resolution or other attributes have been listed yet.

The Realme X50 5G's TENAA listing suggests it will support dual-SIM, dual standby feature. The dimensions of Realme's upcoming phone are said to be 163.8 x 75.8 x 8.9, and that it will sport a 6.57-inch display. Thanks to official teasers, we already know that the Realme X50 5G will flaunt a pill-shaped hole-punch housing two front cameras. Moreover, the TENAA listing of RMX2051 aka Realme X50 5G also mentions the presence of a 4,100mAh display, which is slightly smaller compared to the 4,500mAh unit tipped in leaks, complete with support for 30W fast charging.

Realme has already given us a glimpse of the Realme X50 5G's design, revealing its quad rear camera setup and a side-mounted fingerprint sensor. The phone has also been confirmed to pack the octa-core Qualcomm Snapdragon 765G processor, and that it will support dual-mode 5G (SA +NSA) connectivity. Leaks suggest the phone will come equipped with a 64-megapixel main camera, while selfies will be handled by a 32-megapixel shooter assisted by an 8-megapixel depth sensor. The Realme X50 5G will reportedly be launched alongside a watered-down version of the phone called Realme X50 5G Youth Edition at the January 7 event in China.