The new fast charging technology on Realme X50 5G will come along with a five-chip protection. 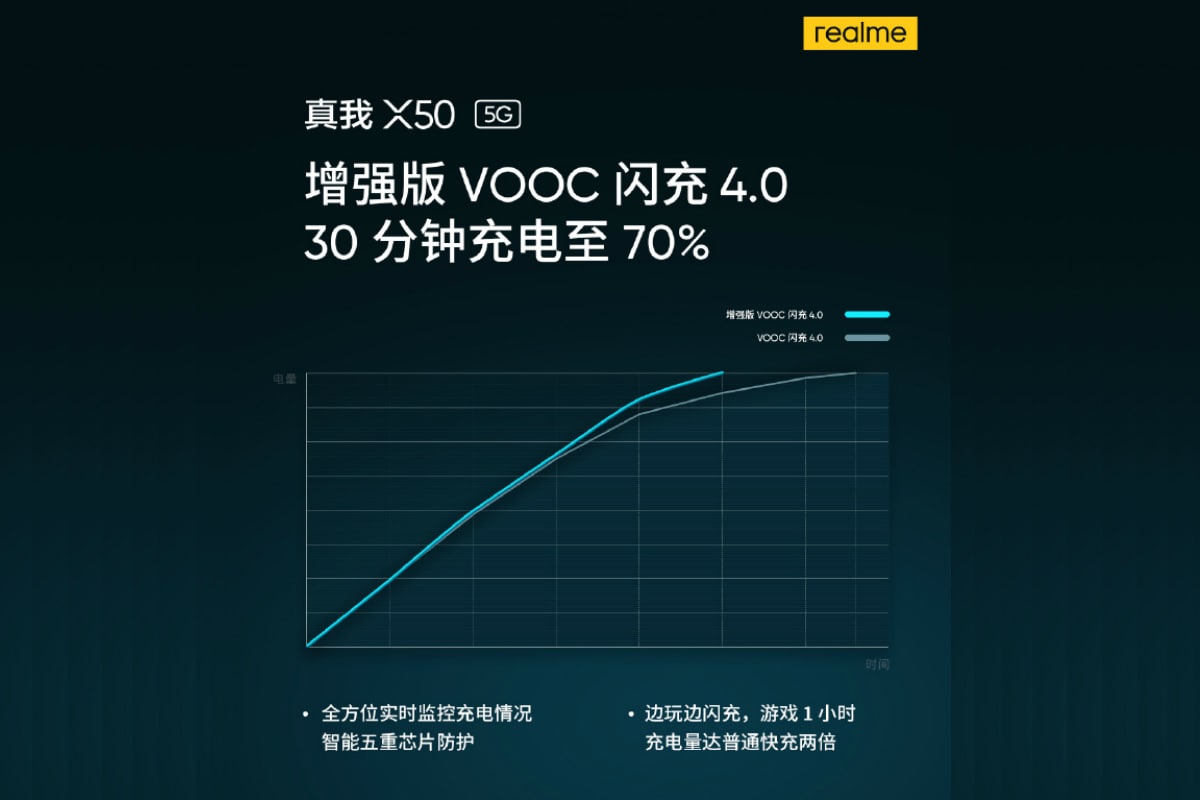 Realme X50 5G is teased to come with an enhanced version of VOOC 4.0 Flash Charge. The new fast charging technology is claimed to charge 70 percent of the built-in battery in just 30 minutes. This seems faster than the existing VOOC 4.0 Flash Charge technology that is rated to charge 67 percent of a 4,000mAh battery in 30 minutes. The Realme X50, which is set to debut as the company's first 5G smartphone, is already teased to have an all-new cooling system. Some early teasers revealed that the new Realme phone will come with dual-channel Wi-Fi and 5G support to deliver better connectivity experiences.

As per the latest teaser posted by Realme on its official Weibo account, the Realme X50 5G will carry the enhanced VOOC 4.0 Flash Charge technology. The smartphone, which will support 5G networks, isn't likely to take hours to charge its battery. Instead, as teased by Realme, it would take 30 minutes to get 70 percent charged. This means that you can safely expect that the phone would be 100 percent charged in less than an hour.

To recall, Oppo unveiled the original VOOC 4.0 Flash Charge technology in September with support for 30W output. The proprietary fast charging standard is aimed to enable a 4,000mAh battery to get 100 percent charged in 73 minutes. Moreover, the company at that time claimed that the new standard will bring a 12 percent faster charging experience over what was available on VOOC 3.0 Flash Charge.

The Realme X2 debuted with VOOC 4.0 Flash Charge. The smartphone was launched in India just earlier this month.

Alongside the enhanced version of VOOC 4.0 Flash Charge, the latest teaser reveals that the Realme X50 will come with comprehensive real-time monitoring of fast charging. This will help balance speed and safety while delivering the new charging experience. The monitoring will be taken care of through a five-chip protection.

The new teaser follows the recent revelation that Realme made to confirm the new cooling system on the Realme X50. The company claimed that there will be a five-dimensional, ice-cooled heat dissipation system along with an 8mm ultra-large diameter liquid-cooled copper tube to offer advanced thermal management.

An early teaser already confirmed that the Realme X50 will come with the Qualcomm Snapdragon 765G SoC. The new processing unit will have an integrated 5G modem and new cores that would together generate plenty of heat and require a new cooling system.

The Realme X50 is expected to debut sometime next month. However, Realme is yet to reveal the concrete launch date.