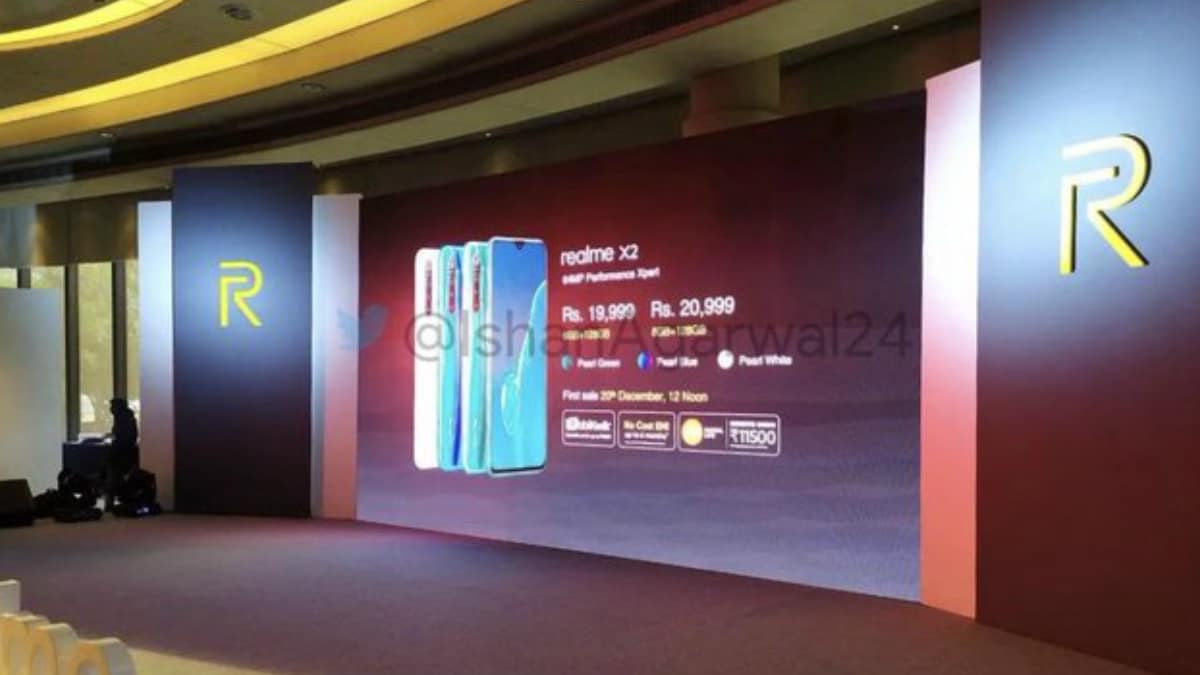 Realme X2 will be launched in India today, however, ahead of the phone's official unveiling, its price in India, colour options, and storage variants have leaked online. The phone is said to start at Rs. 19,999 in the country and will go on sae beginning December 20. To recall,  Realme X2 phone was launched in China in September, and its big highlights include Snapdragon 730G processor, 64-megapixel quad camera setup, 32-megapixel selfie sensor, and 4,000mAh battery with VOOC 4.0 Flash Charge support.

The tipster also suggests that the first sale of the Realme X2 phone will be held on December 20 at 12pm (noon) IST. He has shared a picture what he claims was taken at the Realme X2 launch event rehearsal. The photo suggests sale offers including Jio benefits worth Rs. 11,500, no-cost EMI options, and Mobikwik cashback. As to the laked photo, the phone will be available in Pearl White, Pearl Blue, and Pearl Green colour options in India. It is important to note that these are leaked prices and the official details will be announced by Realme today.

Realme has been teasing the phone on Flipkart, suggesting availability on the e-commerce site. It should go on sale on Realme.com as well.

The Realme X2 has already been launched in China in September. The India variant should sport the same specifications as the China variant, unless the company decides to bring some tweaks. The Realme X2 runs on Android 9 Pie with ColorOS 6, features a 6.4-inch full-HD+ (1080x2340 pixels) Super AMOLED display, includes the in-display fingerprint sensor, and is powered by up to 8GB RAM. The Realme X2 has 64GB and 128GB of onboard UFS 2.1 storage options that both are expandable via a dedicated microSD card.