Realme V15 could be powered by the MediaTek Dimensity 800U SoC and come with a 64-megapixel primary camera sensor. 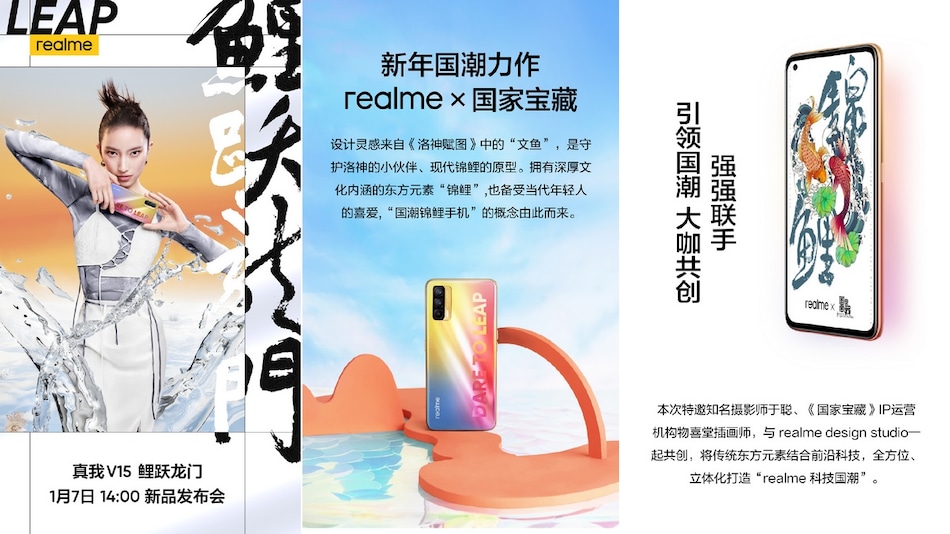 Realme V15 has a gradient finish

Realme V15, aka Realme Koi, will be launched in China on January 7, the company has confirmed on Chinese microblogging website Weibo. An image of the phone's back panel was recently leaked and now the company has shown off both the front and back in an official poster. Realme V15 will be unveiled at 2pm local time (11:30am IST), where the company will reveal the specifications and configurations of the phone, though some of the details were leaked towards the end of last month.

Realme V15 will be unveiled on January 7 through an event at 2pm local time (11:30am IST) in China. The company shared the development on Weibo, which was first spotted by known tipster Mukul Sharma. As of now, the pricing and availability for the phone are unclear and so are the specifications.

The phone has a gradient back panel as previously leaked. It has a rear camera module on the top left corner that houses three sensors and a flash. The ‘Dare to Leap' branding is on the right side of the back panel. On the front, the Realme V15 will come with a hole-punch cut out that is located at the top left corner of the screen. There also seem to be relatively thick bezels all around.

Tipster Abhishek Yadav had recently leaked some specifications of the Realme V15 on Twitter that suggest the phone could come with a MediaTek Dimensity 800U SoC. It was said to have a triple rear camera setup — as also seen in the official poster — headlined by a 64-megapixel primary sensor. The phone has been tipped to support 50W fast charging and weigh 176 grams. There could also be an in-display fingerprint scanner as the phone doesn't seem to have one on the back or the side in the official poster.

While the above information makes the Realme V15 seem like a mid-range phone, other rumours on Weibo suggest that the phone could be a flagship and come with features like 125W UltraDART fast charging.