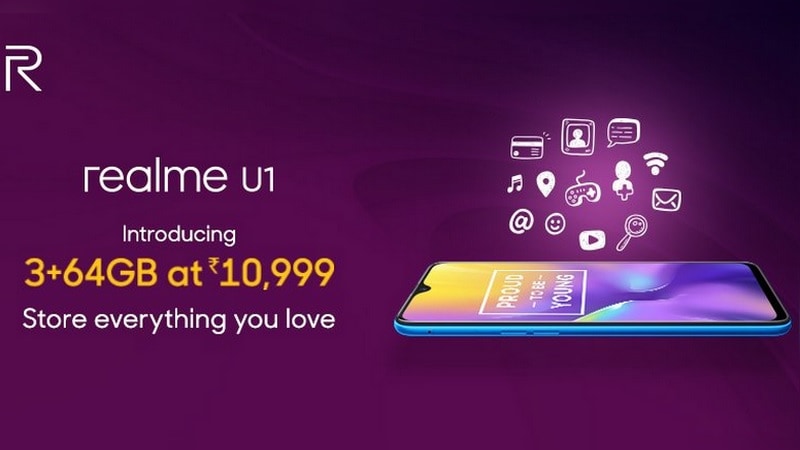 A few days, ago, Realme started teasing about this new variant and has finally made it official. The company tweeted about the new Realme U1 variant's availability and revealed that it will go on sale for the first time at 12pm (Noon) IST on April 10 from Amazon.in and the official Realme website.

The Realme U1 runs Android 8.1 Oreo with ColorOS 5.2 on top. Unfortunately, the Android Pie-based Color OS 6.0 update for the device has been delayed till June. As for the rest of the specifications, it packs a 6.3-inch full-HD+ (1080x2340 pixels) LCD display with a 19.5:9 aspect ratio and draws power from the octa-core MediaTek Helio P70 SoC clocked up to 2.1GHz. In the imaging department, the Realme U1 features a dual rear camera setup that consists of a 13-megapixel primary sensor with an f/2.2 aperture and a 2-megapixel secondary sensor with an f/2.4 aperture, while a 25-megapixel camera handles selfies.

The Realme U1's 64GB onboard storage can further be expanded via a microSD card (up to 256GB), while a 3,500mAh battery keeps the lights on. Back in February, the Realme U1 received a price cut worth Rs. 1,000 on both the original models and got another price cut earlier this month, bringing the asking price down to Rs. 9,999 and Rs. 11,999 for the 3GB RAM + 32GB storage variant and the 4GB RAM + 64GB model respectively.