Realme Q5 Series will be launched at an event scheduled to kick off at 2pm CST (11:30am IST). 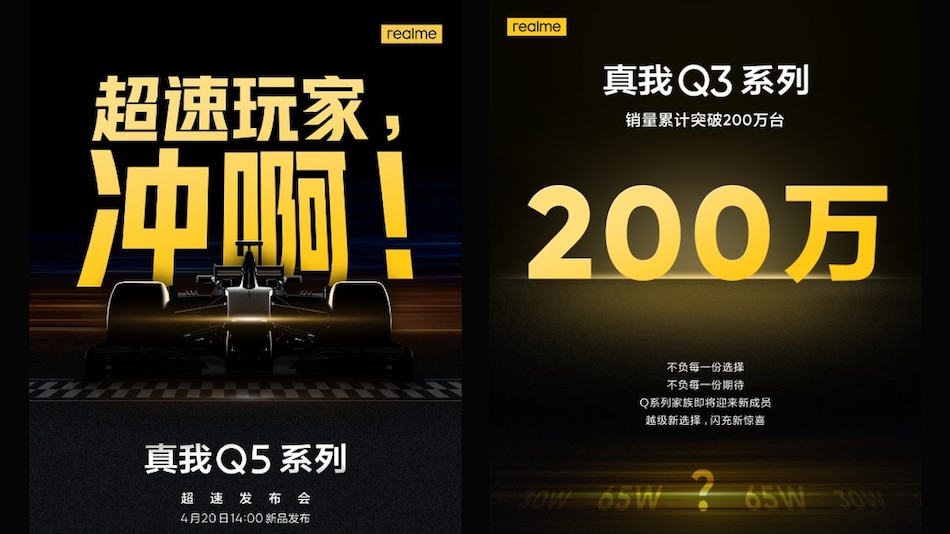 Realme Q5 Series is expected to succeed the Q3 series

Realme Q5 series of smartphones will be launched in China on April 20, the Chinese company has announced on Weibo. Realme has teased that the phone will come with high-speed charging support, and separately, teased that it may be 150W charging support. The news comes a day after an executive shared an image suggesting that the handsets in the series will come with support for faster than 65W charging. The Realme Q5 Series is expected to succeed the Q3 series which was released in 2021.

As per a poster shared by Realme on Chinese microblogging website Weibo, the Realme Q series smartphones will be launched at an event scheduled on April 20 that will kick off at 2pm CST (11.30am IST). There is no further information available on the Realme Q5 series but a poster suggests that a Realme Q5 Pro x Vans model is under development.

Recently, Realme CMO Xu Qi Chase shared an image hinting that the phone will come with fast-charging technology. The image mentions 65W and 30W charging speeds, and a question mark. A report suggested that the Realme Q5 series smartphone could arrive with support for 80W fast charging. But in a new post, the executive has hinted that the phone may get 150W fast charging support.

Reportedly, a Realme smartphone with the model number RMX3372 was spotted on China's TENAA device certification site suggesting a 6.62-inch AMOLED display with a full-HD+ (2,400x1,080 pixels) resolution. Under the hood, the phone could get a Snapdragon 870 SoC paired with up to 12GB of RAM and up to 512GB of onboard storage. As far as camera is concerned, the phone may get a triple rear camera setup with a 64-megapixel primary sensor, an 8-megapixel ultra-wide shooter, and a 2-megapixel macro sensor. It could come with a 16-megapixel selfie camera, and an in-display fingerprint sensor.