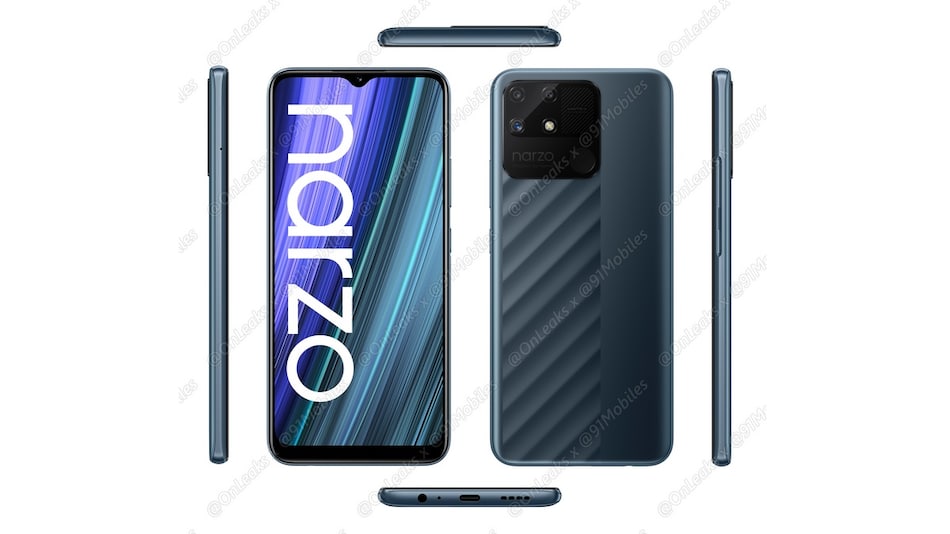 Realme Narzo 50A will likely be the cheapest in the series

Realme Narzo 50A is expected to be the next Narzo-branded smartphone following the Realme Narzo 30 series. Its design has allegedly leaked via fresh renders that show a unique back panel, triple rear camera setup, and a fingerprint scanner on the back. The phone was said to have been first spotted in Bureau of Indian Standards (BIS) and Thailand's National Broadcasting and Telecommunications Commission (NBTC) listings, hinting at an India launch sometime in the near future.

It looks like Realme will be skipping the Narzo 40 series of smartphones, which isn't really surprising as it has skipped the number ‘4' in the past as well with its other smartphone lineups. The Realme Narzo 30 series from earlier this year will likely be followed up by Narzo 50 series of which the Realme Narzo 50A has been allegedly leaked. As per new renders shared by 91Mobiles in collaboration with tipster Steve Hemmerstoffer (@OnLeaks) show a unique design for the back panel with three quarters of it sporting a pattern while the rest having in a plane finish.

The renders also show a triple rear camera setup housed in a small square-shaped module, which itself is housed in a larger square that also includes the rear-mounted fingerprint scanner. The Realme Narzo 50A may come with a notched display and feature a 3.5mm headphone jack along with a USB Type-C port at the bottom.

Recently, the Realme Narzo 50A was spotted in BIS and NBTC listings with the model number RMX3430. The NBTC listing purportedly shows the name ‘Realme Narzo 50A'. Additionally, the same model number was spotted on Camerafv5.com database, which suggests the phone will carry a 13-megapixel (12.5-megapixel in the database) sensor with an f/1.8 lens, a 1/3-inch sensor, and maximum image resolution of 4,080x3,072 pixels. The listing also shows an 8-megapixel selfie shooter that has an f/2.0 aperture, a 1/3.6-inch sensor, and a maximum picture resolution of 3,264x2,448 pixels along with fixed focus.

As of now, Realme has not shared any information on the Realme Narzo 50 series and it is unclear when it will be unveiled.