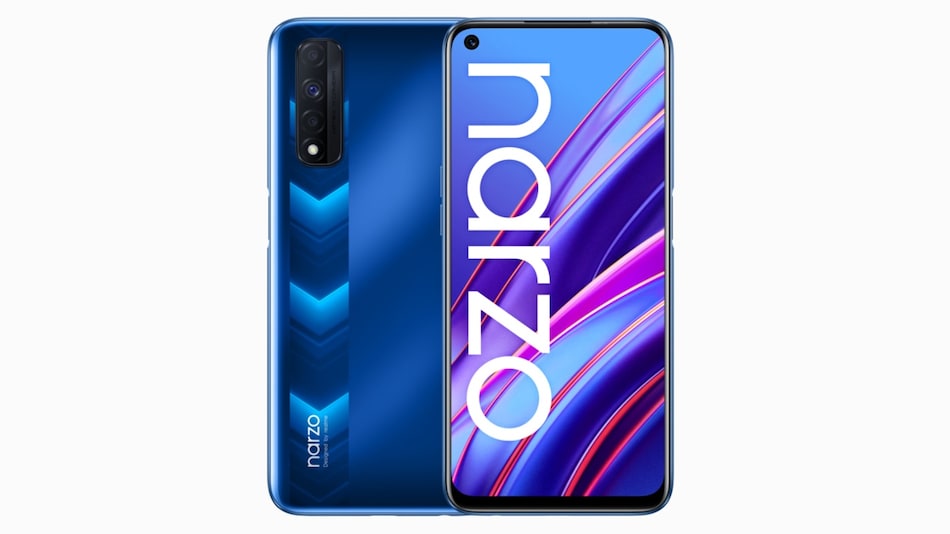 Realme Narzo 30 has been launched on Tuesday as the company's newest addition to the lineup that already has the Narzo 30A and Narzo 30 Pro 5G. The new Realme phone comes with a 90Hz display and is powered by an octa-core MediaTek Helio G95 SoC. The smartphone also features triple rear cameras and carries a racetrack-inspired chevron stripe at the back. Other highlights of Realme Narzo 30 include a hole-punch display design, 30W fast charging, and 128GB of onboard storage.

Realme Narzo 30 price has been set at MYR 799 (roughly Rs. 14,100) for the sole 6GB + 128GB storage variant. The phone comes in Racing Blue and Racing Silver colour options and will go on sale in Malaysia starting May 19. Details about the pricing and availability of the Realme Narzo 30 in other markets, including India, are yet to be revealed.

Realme Narzo 30 sports a triple rear camera setup that comprises a 48-megapixel primary sensor with an f/1.8 lens, a 2-megapixel monochrome sensor with an f/2.4 lens, and a 2-megapixel macro shooter. The rear camera system supports features such as Super Nightscape, Ultra 48MP Mode, Panorama, Portrait Mode, Time-lapse Photography, HDR, Ultra Macro, AI Scene Recognition, and AI Beauty. It also offers up to 4K/ 30fps video recording. For selfies and video chats, the Narzo 30 has a 16-megapixel Sony IMX471 selfie camera at the front. It is paired with a five-piece f/2.1 lens.

The Narzo 30 from Realme has 128GB of UFS 2.1 storage that is expandable via a microSD card through a dedicated slot. Connectivity options include 4G LTE, Wi-Fi 802.11ac, Bluetooth v5, GPS/ A-GPS, NFC, USB Type-C, and a 3.5mm headphone jack. Sensors on board include an accelerometer, ambient light sensor, magnetometer, and a proximity sensor. There is also a side-mounted fingerprint sensor.

Realme has provided a 5,000mAh battery on the Narzo 30 that can deliver up to 32 days of standby time. There is also 30W Dart Charge fast charging support that is rated to charge the inbuilt battery to 100 percent in 65 minutes. The phone measures 162.3x75.4x9.4mm and weighs 192 grams.