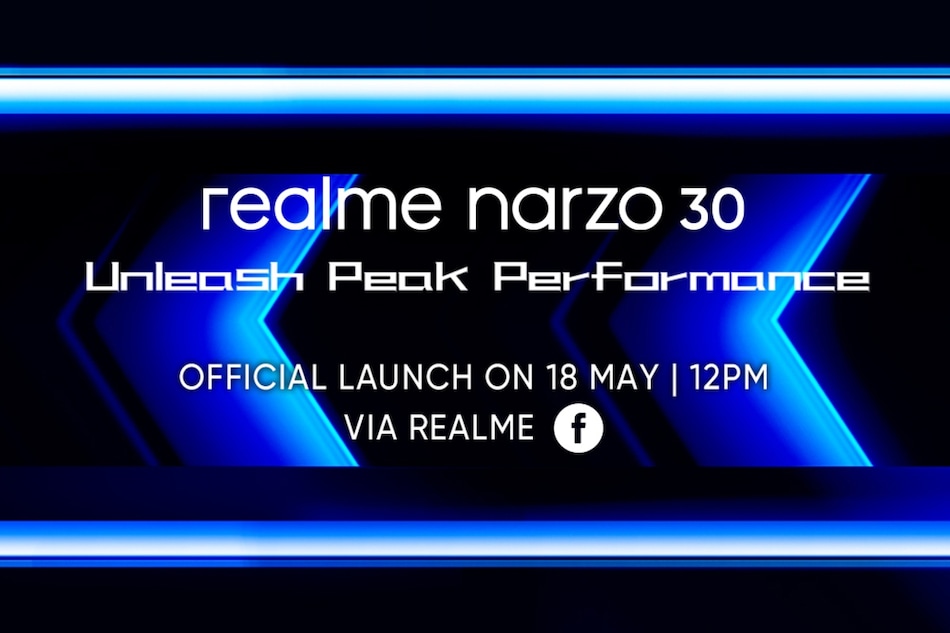 Realme Narzo 30 is set to launch on May 18, the company has revealed on the Web. The new smartphone is officially confirmed to come with a MediaTek Helio G95 SoC. Separately, a hands-on video purportedly showing the Realme Narzo 30 has surfaced on YouTube that suggests its design and key specifications. The Realme phone will be the third model in the company's Narzo 30 series that so far comprises the Narzo 30A and Narzo 30 Pro 5G. It is rumoured to have a 48-megapixel primary camera and a 90Hz display.

The Realme Malaysia website has revealed the launch date of the Realme Narzo 30 in the country. The launch will take place at 12pm (noon) MYT (9:30am IST) on May 18, as per the details available on the company's site.

Realme has also posted a teaser on its Malaysian Facebook page that confirms the presence of MediaTek Helio G95 SoC. A Geekbench listing hinted at the same chipset last month.

In addition to the official details, YouTube channel Marc Yeo Tech Review has shared the purported hands-on video. The over-seven-minute video shows the design and specifications of the phone which it claims is the Realme Narzo 30. It shows a distinct design on the back of the smartphone with an arrow-like pattern on a vertical stripe. This is similar to what was seen on the US FCC site in April. The Realme Narzo 30 also has a hole-punch display and thin bezels.

The purported hands-on video suggests that the Realme Narzo 30 would come with a 6.5-inch full-HD+ display with a 90Hz refresh rate and 580 nits brightness. The phone could also carry at least 6GB of RAM as well as 128GB of onboard storage. It is also expected to have a 5,000mAh battery with 30W Dart Charge fast charging technology. Further, The phone appears to have a triple rear camera setup, with the 48-megapixel primary sensor. It is also seen to have Android 11 with Realme UI 2.0.

Previous reports suggested that the Realme Narzo 30 could come with 9.5mm of thickness. The phone is also rumoured to have a 16-megapixel selfie camera sensor at the front.

The Realme Narzo 30 seems set to debut with 4G connectivity. However, Realme India and Europe Vice President Madhav Sheth recently confirmed that the Narzo 30 will also have a 5G model.

It is unclear whether the Realme Narzo 30 would make its way to India anytime in the coming days. But nonetheless, the company's track record suggests that we can expect its launch in the Indian market as well.