Realme Narzo 10 is set to be unveiled on March 26 via a livestream. 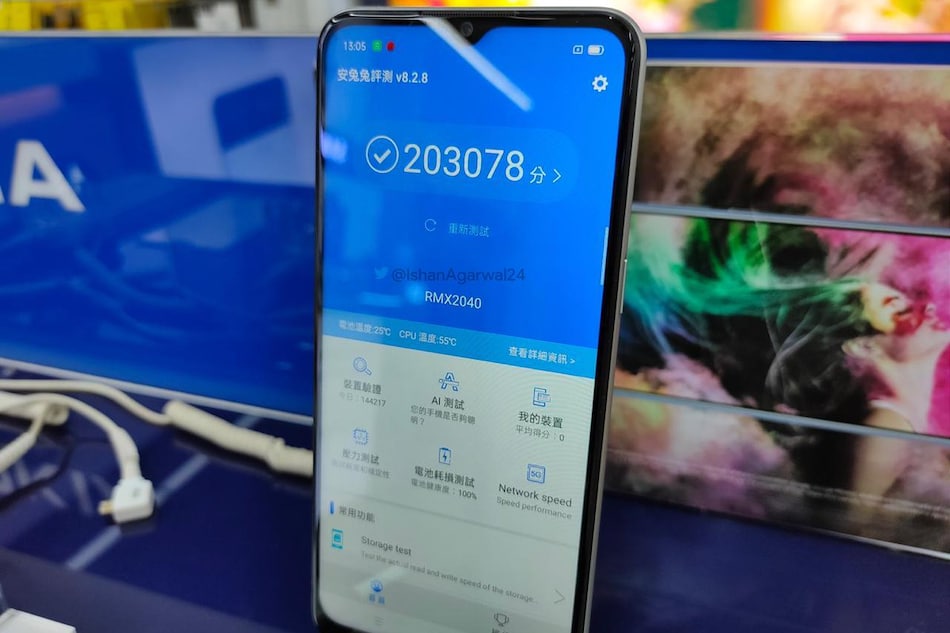 This could be our first look at Realme Narzo 10

Tipster Ishan Agarwal on Friday tweeted an image purportedly showing the Realme Narzo 10. Agarwal claimed that the phone with a model number RMX2040 was spotted in a retail store. Further, the image posted on Twitter shows a total score of 203,078 points on benchmark app AnTuTu. This is lower than the 290,210 points earned by the Realme 6 and 280,912 points received by the Poco X2 during our review.

While responding to Agarwal's tweet, another Twitter user who goes by the user name Ishan Wankhade posted an image suggesting the key specifications of the Realme Narzo 10. It shows a 6.5-inch display, quad rear camera setup along with a 48-megapixel primary sensor, 16-megapixel selfie camera, MediaTek Helio G80 SoC, and 18W Quick Charge support via USB Type-C. All this is just identical to the Realme 6i, which was initially in the rumour mill with the same RMX2040 model number that is now speculated for the Realme Narzo 10.

Realme hasn't yet confirmed the pricing details of the Narzo 10. However, it did reveal some of its key specifications earlier this week that already suggested similarities with the Realme 6i. The company mentioned on its promotional page that the phone would feature a 6.5-inch display with 89.8 percent screen-to-body ratio and a waterdrop-style notch. The phone was also teased to include a 5,000mAh battery and feature a striped pattern at the back.

Alongside the Narzo 10, the Oppo spin-off entity is bringing the Realme Narzo 10A to India. The latter is speculated as a rebranded version of Realme C3 Thailand variant that was launched last month. The Thailand model had some changes over what made its way to India last month.

Both the Realme Narzo 10 and Narzo 10A are set to launch in India through a livestream on March 26. Meanwhile, you can expect more leaks and rumours as well as official teasers to indicate more details over the next few days.