Realme Narzo 10 and Realme Narzo 10A specifications have been tipped at many points, and their launch event will begin at 12.30pm IST. 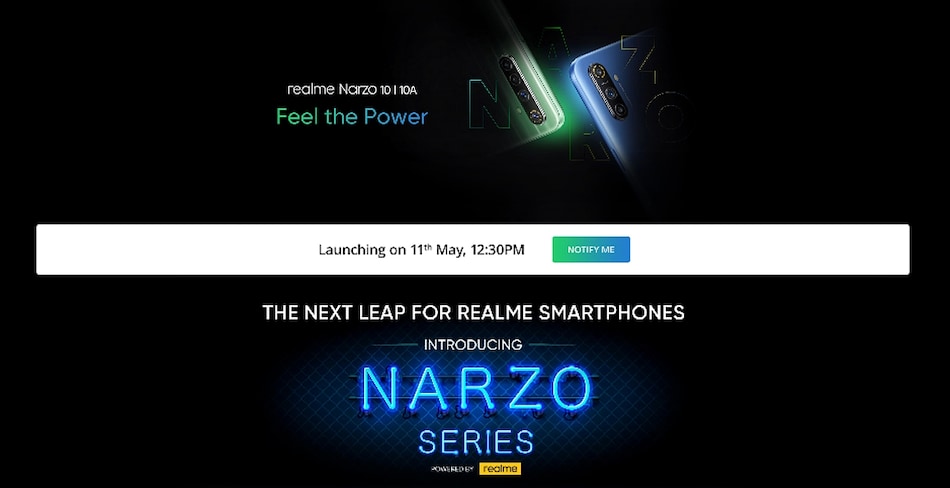 The Realme Narzo 10 and Realme Narzo 10A launch event will begin at 12.30pm IST. The event can be watched via YouTube and the company's official social channels. Realme says that the launch presentation video was recorded before the lockdown. The company claims to have “taken all the health and safety measures while recording the video” in its own office earlier – ahead of the lockdown. The decision to finally launch the Realme Narzo 10 series comes after the government introduced some relaxations in selling of non-essential goods in green and orange zones in the country. E-commerce giants are still ordered to sell only essential goods in red zone (high impact) areas.

As mentioned, the most recent teaser by Realme confirmed the presence of the MediaTek Helio G80 SoC on the Realme Narzo 10. As per leaks and official teasers, Realme Narzo 10 is expected to be a dual-SIM smartphone and it will run on Android 10 with Realme UI on top. It is teased to pack 6.5-inch HD+ (720x1,600 pixels) display with an 89.8 percent screen-to-body ratio and a waterdrop-style notch. The Realme Narzo 10 is tipped come in two RAM options – 3GB and 4GB. It is expected to offer up to 128GB of internal storage with the option to expand further using a microSD card slot.

On the imaging front, Realme Narzo 10 is going to feature a quad camera setup on the back, with a 48-megapixel primary shooter, an 8-megapixel ultra-wide-angle camera, a monochrome sensor and a macro camera. The front camera, on the other hand, is believed to be a 16-megapixel shooter. The company has also confirmed the presence of 5,000mAh battery on the Narzo 10 that claims to last up to 30 days on standby

Realme Narzo 10A specifications are expected to include MediaTek Helio G70 SoC. Additionally, the phone is likely to pack a fingerprint scanner on the back, a triple rear camera setup with 12-megapixel main shooter, and 5-megapixel selfie camera. Realme Narzo 10A will also likely run Android 10 out-of-the-box with Realme UI 1.0 on top and feature the usual connectivity options and a Micro-USB port.

It is teased to sport a 6.5-inch HD+ screen with a waterdrop-style notch, and a similar 5,000mAh battery as the Realme Narzo 10.