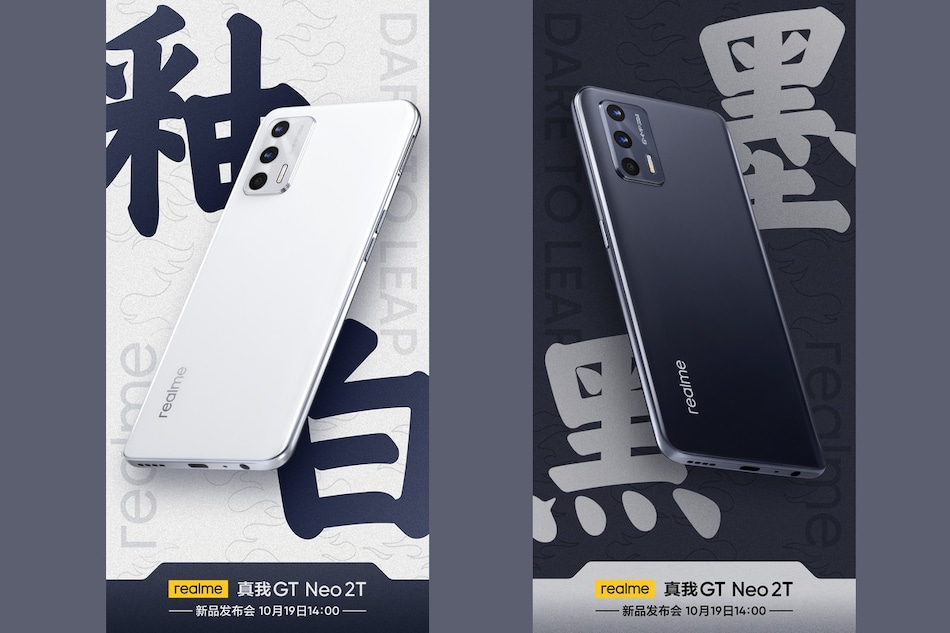 Realme GT Neo 2T's new colour options have been teased by the company ahead of its launch in China on October 19. The two new colour options come in monochromatic shades. A notable tipster has also spotted the upcoming smartphone on Realme's India website, hinting that the smartphone may launch in the country sometime soon. Realme GT Neo 2T has only been scheduled to launch in China as of now, and there is no official information regarding the specifications of the upcoming smartphone.

Separately, notable tipster Mukul Sharma (@stufflistings) has spotted Realme GT Neo 2T on the company's India website. However, not much information is available regarding the India launch of the smartphone as of now.

Earlier this month, Realme GT Neo 2T's key specifications were tipped by Sharma, tipster Digital Chat Station, and most recently by MySmartPrice. Specifications of the upcoming smartphone are said to be similar to Realme GT Neo 2 which is launching in India on October 13. Realme GT Neo 2T is said to sport the same 6.43-inch full-HD+ (1,080x2,400 pixels) AMOLED display with a 120Hz refresh rate and a hole-punch cutout for the selfie camera. It is also said to run Android 11.

The processor powering the Realme GT Neo 2T is still unclear as the tipster Digital Chat Station mentioned that it will pack a Snapdragon 888 SoC, while MySmartPrice reported that the phone will be powered by a MediaTek Dimensity 1200 SoC.