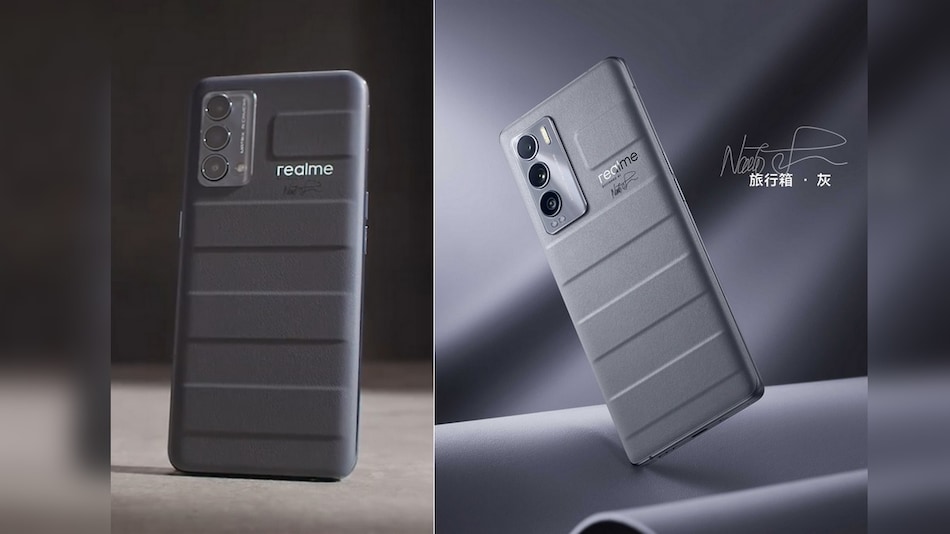 Realme GT Master Edition will be unveiled on July 21 and will come in two variants, as teased by the company on Chinese microblogging website Weibo. The phone can be seen sporting a triple rear camera setup and a unique back panel design resembling a leather suitcase. The two variants of the Realme GT Master Edition seem to have the same suitcase style back panel but come with slight differences to the camera module. As of now, the company has not shared the specifications for the phone.

Vice President of Realme and President of Global Marketing, Xu Qi Chase, shared an image of the Realme GT Master Edition on Weibo showing the leather back design in the style of a suitcase. It can be seen sporting a triple rear camera setup with three vertically aligned sensors with the pill shaped flash located next to the top sensor. The grey back curves at the edges and the Realme branding and designer Naoto Fukasawa's signature.

At the same time, the company shared a video on Weibo showing what seems to be a different version of the Realme GT Master Edition that has the same leather suitcase style design but a slightly different camera module. The three sensors are aligned vertically but the round flash is located next to the bottom sensor. The Realme branding and Fukasawa's signature is present on this variant as well. The company also revealed the Realme GT Master Edition will be unveiled on July 21 and more details about the models can be expected in the coming days.

Realme has not disclosed what the two different versions of the Realme GT Master Edition are as of yet, and details about specifications are unclear as well. Past leaks have suggested the phone will be powered by the Qualcomm Snapdragon 870 SoC and feature a 6.55-inch Samsung E4 Super AMOLED display that has a 120Hz refresh rate. The phone is said to support 65W fast charging as well. As of the cameras, there have been conflicting reports claiming a 50-megapixel Sony IMX766 main sensor while a separate report claimed it will feature a 64-megapixel primary sensor.