Realme GT 5G will come with UFS 3.1 storage and LPDDR5 RAM, the company revealed ahead of the official launch. 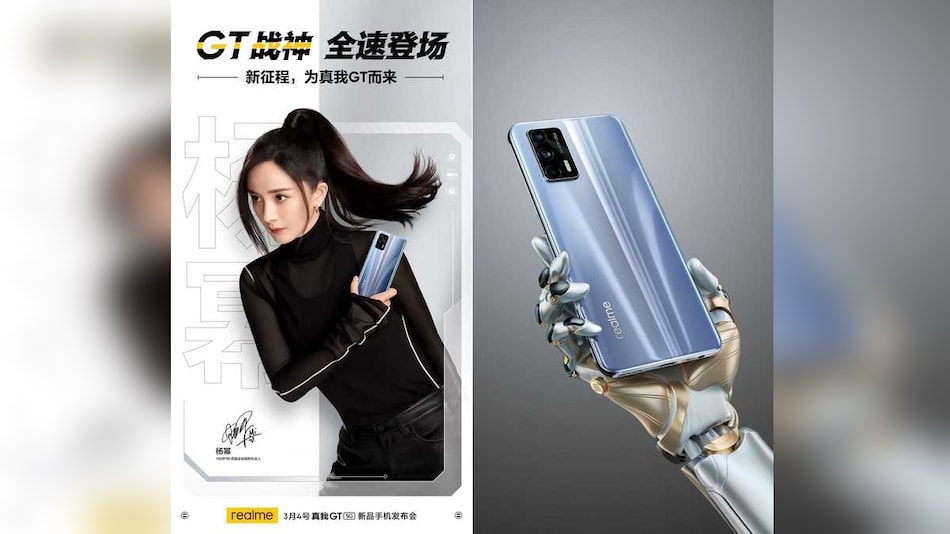 Realme GT has a race car-inspired pattern on the back

Realme GT 5G posters reveal that the phone will sport a triple rear camera setup and a 3.5mm headphone jack. The company has been teasing features of Realme GT on Weibo ahead of its March 4 launch. One of the posters also confirmed the presence of a 64-megapixel primary sensor on the phone. Realme GT is the company's upcoming flagship and its first phone to be powered by the Qualcomm Snapdragon 888 SoC. Some other specifications for the phone have also been shared by the company.

Realme's official account and Vice President of the company Xu Qi Chase shared on Weibo a couple of posters that reveal some information about Realme GT, along with its design. The phone will come with a triple rear camera setup, headlined by a 64-megapixel primary sensor. The rectangular camera module houses the three sensors aligned vertically, along with the flash. The blue gradient back panel has a pattern on it, with the Realme branding towards the bottom.

Chase also shared a poster that shows the back panel in more clarity. A speaker grille, a USB Type-C port, and a 3.5mm headphone jack can also be seen on the bottom.

Realme shared a couple of specifications for the Realme GT on Weibo and the phone will come with UFS 3.1 storage and LPDDR5 RAM. The company has already confirmed that the phone will be powered by the Snapdragon 888 SoC and it will launch on March 4 at 2pm local time (11:30am IST). The March 4 launch date will be the phone's global debut.