Realme GT 5G Confirmed to Launch on March 4, May Have Leather and Glass Back 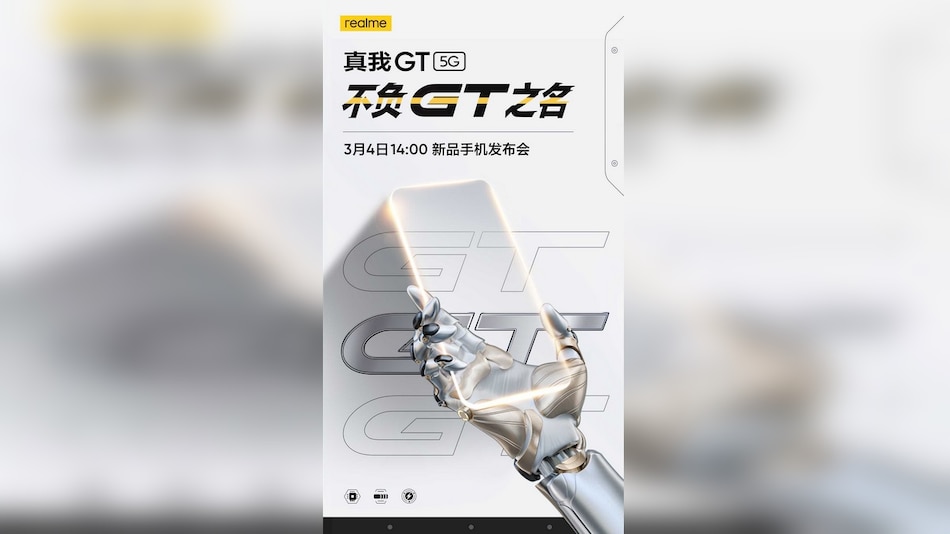 Realme GT 5G, previously believed to be named Realme Race, will launch on March 4 in China. Realme Chief Marketing Officer (CMO) Xu Qi Chase shared a poster on Weibo with the launch date and confirmed the name to be Realme GT. The phone will be a flagship that will be powered by the Qualcomm Snapdragon 888 SoC. Further, a tipster has shared that the company may release leather- and glass-back variants of Realme GT. The phone has been previously spotted in an alleged TENAA listing showing the design and has also reportedly shown up on Bureau of Indian Standards (BIS) website.

Realme CMO Chase shared a poster on Chinese microblogging website Weibo revealing the launch date to be March 4 at 2pm local time (11:30am IST). Alongside, the company sent a press release, calling the March 4 date a global debut. The poster not only announces the launch date but also confirms the name to be Realme GT.

Previously, the phone was believed to be called Realme Race but that was a codename for it. The poster also shares that the phone will come with 5G connectivity.

There are three icons on the bottom left of the poster indicating the processor, refresh rate, and fast charging. Realme GT 5G is confirmed to be powered by the Snapdragon 888 SoC. Tipster Abhishek Yadav claims that the Realme GT will feature a 160Hz display and come with support for 125W fast charging. Yadav cites a “Chinese friend” for this information, which is in line with previous leaks that also hint at a 160Hz refresh rate display.

Furthermore, known tipster Digital Chat Station (translated) has shared on Weibo that the Realme GT may come in leather back and a glass back variants. The tipster also mentions the phone will be equipped with the Snapdragon 888 SoC. However, it should be noted that the company has not shared any information on the design or specifications of the Realme GT.

From a recently TENAA listing with model number RMX2202 said to be Realme GT, it can be seen that there is a hole-punch cutout for the selfie camera in the top left corner of the screen. There is also a rectangular camera module on the back that houses a triple or a quad rear camera setup. The same model number was also spotted in a Bureau of Indian Standards (BIS) listing hinting at an imminent India launch. More information on the phone can be expected as we move closer to launch.