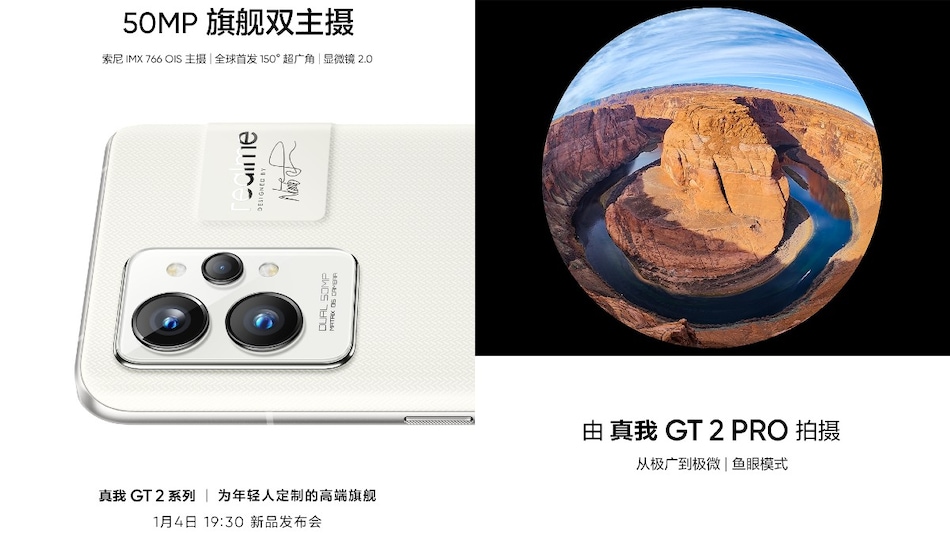 Realme GT 2 Pro will also come with a Fisheye Mode

Realme GT 2 Pro camera specifications have been revealed and the smartphone is teased to come with a lot of photography-related features. In two separate posts on Weibo, Realme shared that the smartphone will feature a triple rear camera setup in which two will be 50-megapixel sensors. The Realme GT 2 series, which is expected to have three distinct models — the regular Realme GT 2, Realme GT 2 Pro, and the Realme GT 2 Master Edition — will be launched on January 4 in China.

As per the first post by Realme on Weibo, the Realme GT 2 Pro will get a 50-megapixel Sony IMX766 primary camera with optical image stabilisation (OIS). The second sensor will also be a 50-megapixel one, and will be paired with a lens that offers a 150-degree field-of-view. Realme says it will be the world's first smartphone with such a wide-angle camera.

The second Weibo post has Realme teasing the third camera on the GT 2 Pro, called Microscope 2.0, boasting it can capture “extreme micro” images. Previous leaks have tipped the third camera will sport a 2-megapixel sensor paired with a micro lens.

Meanwhile, tipster Digital Chat Station has posted that the microscope lens of the Realme GT2 Pro has upgraded the depth of field by 4 times and the object distance by nearly 2 times. The tipster also claims that the camera can also detect content like skin and water (translated). Other features of the Realme GT 2 Pro include a Fisheye Mode that is used for shooting extremely wide angles to capture more area as compared to the regular wide-angle cameras.

Furthermore, the image teaser that Realme posted on Weibo shows the phone's camera module with a signature. It could be the Realme GT 2 Pro Master Edition which is co-designed by Realme design studio and Japanese designer Naoto Fukasawa.