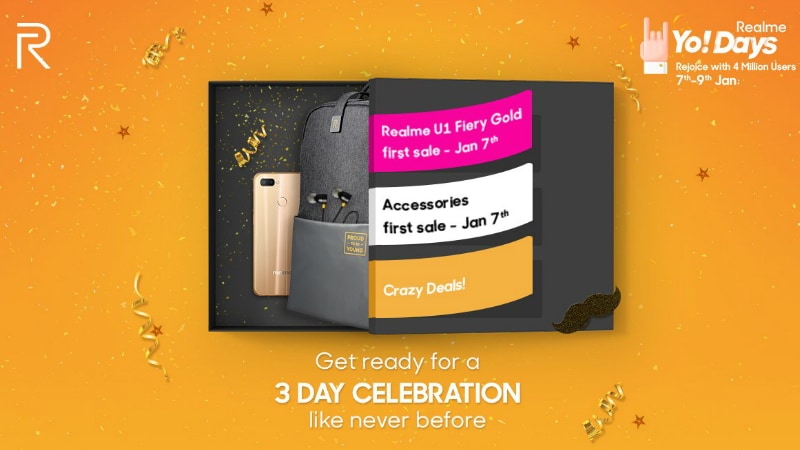 Realme has managed to attract 4 million users in eight months

Realme has announced that it now enjoys 4 million total users. This milestone has been achieved merely in a matter of eight months since the launch of the brand. To celebrate this milestone, Realme has announced the Realme Yo Days from January 7 to January 9. The company will host the Realme U1 Fiery Gold first sale during the sale period, and also make the Realme Buds available to buy. It also claims that crazy deals will be listed during the four-day sale.

The brand took to Twitter to announce the 4 million users milestone. To recap, Realme was launched as an Oppo sub-brand in May, wherein it first announced the Realme 1 in India. Since then, Realme has separated from Oppo to become and independent company, launched four new phones, and even announced the Realme Buds in November last year. The latest addition to its smartphone portfolio has been the Realme U1 device, and while the Ambitious Black and Brave Blue colour options have been available for a while, the Fiery Gold variant was to be made available in the 'New Year'.

Recently, Realme also rolled out Color OS 5.2 for Realme 2 and Realme C1 users bringing the Smart Bar, December security patch, and more. The company is looking to expand its offline presence in 150 cities in 2019. CMR claimed that Realme was the top emerging brand in India in 2018, and Flipkart also said that it sold over 2 million Realme 2 phones in 2018.