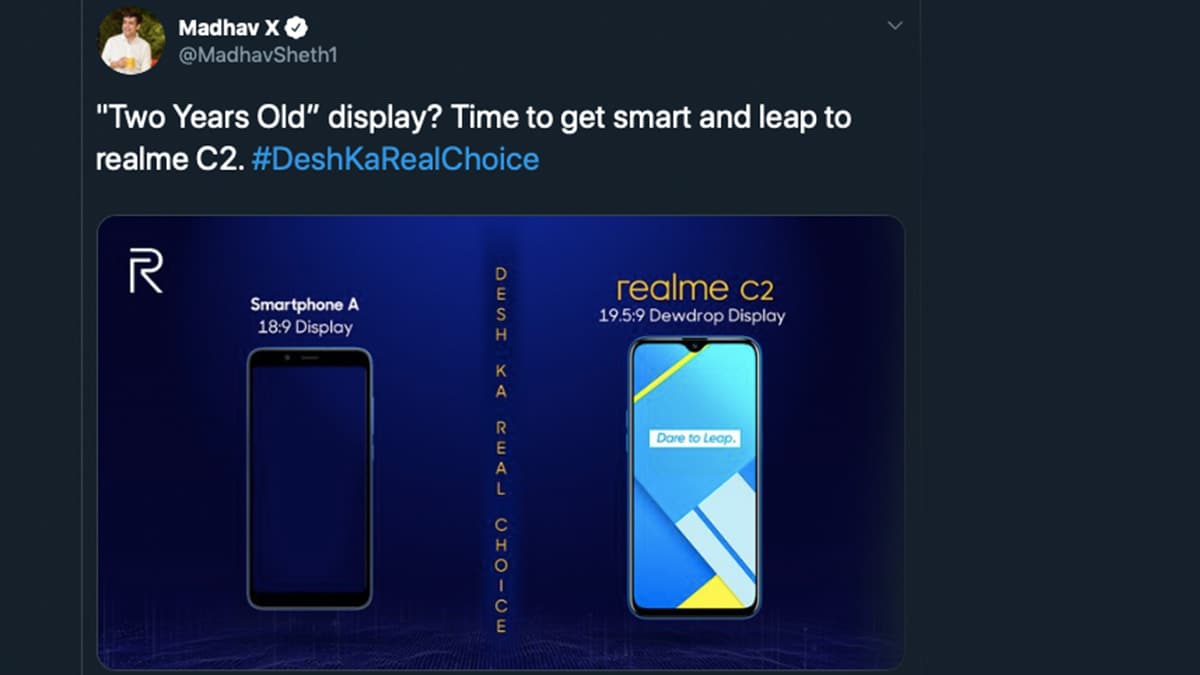 Realme, the spin-off company from parent Oppo, has seen tremendous growth in the Indian market since it launched and today, it has a decently large portfolio of smartphones, catering to all aspects of the budget segment. It's no secret that the Xiaomi has been long dominating this space and now, recent tweets from Realme India's CEO highlight the rivalry between Realme and Xiaomi, as both compete for recognition in the highly price-sensitive market. Following the launch of Xiaomi's budget Redmi 7A in India yesterday, Realme India's CEO Madhav Sheth took to Twitter to poke fun at the new smartphone.

It was quite civil in the beginning, with Realme's Madhav Sheth or Madhav X as he's now known on Twitter, starting with a tweet around 9AM yesterday, stating that he hopes the Realme C2 (Review) gets a real competitor in its segment, as that naturally means more choice to the end user.

This was followed by a direct attack on Xiaomi's new phone a couple of hours later, with a tweet which compared the Realme C2's slim bezels, wider aspect ratio, and dewdrop notch to the Redmi 7A's narrower aspect ratio and thick upper and lower bezels. This was supplemented with a hashtag #DeshKaRealChoice, which was another play on Xiaomi's tagline for the Redmi 7A, which read “Desh Ka Smartphone.” Sheth does have a point here though. The Redmi 7A doesn't have the most modern aesthetic, which is a little strange for a new phone in 2019.

Next Sheth goes after the camera on the Redmi 7A, which has a single rear sensor compared to the dual rear cameras on the Realme C2, which consists of a 13-megapixel main camera and a 2-megapixel depth sensor. Finally, Sheth ends his attack with a fourth tweet, comparing the specifications of the two phones, with the main differences highlighted. We've also compared the two smartphones in terms of price and specifications, and you can check out our detailed comparison.

Sheth's attempt to rain on Xiaomi's parade didn't go exactly as planned as there were many ‘interesting' comments to his tweets from Xiaomi's supporters, which were hilarious to say the least. Most of the Xiaomi's launches have proven to be very popular amongst fans and its users, especially in the budget segment, so with the Redmi 7A stepping on the C2's shoes, it was a desperate attempt from Realme to kill the buzz around the phone.

The Redmi 7A goes on sale on July 11, with a starting price of Rs. 5,999 for the model with 2GB of RAM and 16GB of storage - though a Rs. 200 introductory discount for the month of July brings the starting price down to Rs. 5,799. Realme's starting price for the C2 with the same amount of RAM and storage, is Rs. 5,999. We'll just have to wait and see how popular Xiaomi's new entry-level phone is, once it hits the market.